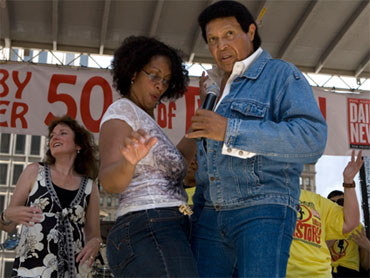 Fifty years to the day after the release of the hip-swiveling tune "The Twist," the man who made it famous celebrated the occasion in his hometown.

Chubby Checker performed Friday at a free noontime concert at Philadelphia City Hall. About 1,000 people joined in on the gyrations, some even invited onstage by the South Philadelphia-bred singer.

"The Twist," released as a single on July 9, 1960, burst into the rock 'n' roll stratosphere after Checker performed it for Dick Clark on his Philadelphia-based "American Bandstand."

Checker's 1960 cover version of the Hank Ballard and the Midnighters song - released a year earlier to mild success - became a smash hit and turned the dance into a pop culture touchstone. It remains the only single to reach No. 1 on the U.S. charts during two separate runs, in 1960 and again in 1962.

The dance popularized couples dancing apart to the beat of the music, a revolutionary idea that's now the norm, Checker said.

"When you're on the floor dancing to Lady Gaga, Chubby Checker is there," he said.

The trim 68-year-old singer, clad in a denim jacket and skintight jeans, performed some of his other dance-craze hits including "The Fly," ''Pony Time" and "The Hucklebuck," a dance with some suggestive hip thrusts that Checker executed with ease.

Checker brought groups of fans onstage throughout the concert. Ages, sizes and senses of rhythm varied widely, but no one was short of enthusiasm.

He also sang a medley of other singers' hits from the era, from Chuck Berry and Little Richard to The Beatles' "I Saw Her Standing There."

The finale, of course, was "The Twist," which kept the crowd going despite temperatures around 90 degrees (32 Celsius).

"If you ain't moving to this, well, then, you've got to be dead," said Martin Jackson, 59, as he held his cell phone aloft so his sister in Washington, D.C., could listen in. "This is the 12-bar blues right here. That's what it's all about."