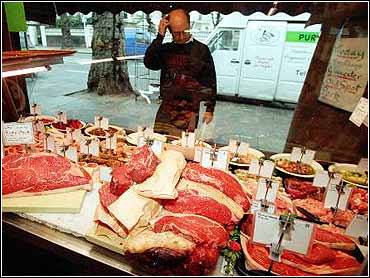 Following are key dates in the mad cow crisis:

1986 — First diagnosis of bovine spongiform encephalopathy (BSE), a new disease in cattle, is made.

July 7, 1988 — Britain announces that all cows known to be infected with BSE will be destroyed as a precautionary measure.

1990 — European Commission bans imports to the continent from Britain of cattle over six months old.

1994 — European Union approves proposal to ban exports of meat containing bones from herds which had not been free of BSE for six years instead of two.

1996 — British government admits for the first time that BSE could be transmitted to humans in the new form of Creutzfeldt Jakob disease (vCJD).

April 1, 1996 — Britain offers a range of actions including general and targeted culling of cows. It would involve killing all unproductive cows over the age of 30 months and destroying their carcasses.

May 21, 1996 — Prime Minister John Major says Britain will no longer cooperate in E.U. business until the ban on its beef exports had been eased and a framework for a complete lifting put in place.

May 24, 1996 — Britain issues proceedings in the European Court of Justice seeking the annulment of the beef ban.

July 12, 1996 — The European Court of Justice rejects a bid by Britain for an immediate suspension of the European Union's worldwide ban on British beef exports.

Aug. 1, 1996 — Britain's agriculture ministry confirmed that mad cow disease can be passed from cow to calf.

Aug. 2, 1996 — A British scientist said that reports that cows can pass BSE on to their calves meant it was possible pregnant omen with vCJD could infect their babies.

Aug. 19, 1996 — A British coroner ruled that Peter Hall, a 20-year-old vegetarian who died of the vCJD, caught it from eating beefburgers as a child. The verdict is the first to legally link a human death to mad cow disease.

1997 — The European Parliament condemned European Commission President Jacques Santer and Britain for serious errors in the way they handled the mad cow crisis.

Dec. 3, 1997 — Britain banned the sale of boneless beef as a precautionary move to stop the risk of mad cow disease.

March 16, 1997 — E.U. farm ministers voted to ease the worldwide ban on British beef exports and allow a limited resumption in exports from Northern Ireland of beef from cattle in herds guaranteed to be free of mad cow disease for eight years.

Sept. 22, 1999 — The British government's chief medical adviser warned that the country could face a possible epidemic of human mad cow disease in the years ahead.

June 29, 2000 — British Agriculture Minister Nick Brown announces that a cow, born after measures were introduced to eradicate mad cow disease, had been found to have BSE.

Oct. 26, 2000 — Britain's official report into BSE criticizes officials for consistently playing down the risk to humans and failing to properly coordinate a government response. British government announces compensation scheme for the victims of the human form of mad cow disease.

Nov. 7, 2000 — French farmers decide to no longer sell meat from cows born before mid-1996, the date when France introduced strict measures to fight the illness.

Nov. 10, 2000 — France bans sweetbreads, the Swiss Red Cross limits blood donations from people who spent time in Britain, and the European Union's health and consumer protection commissioner urged EU member nations to go beyond a recent requirement that they randomly test their herds by January.

Nov. 14, 2000 — France bans the T-Bone steak and the use of animal feed made with meat, calls for a review of slaughterhouse practices and triples funds for studying the cause of BSE.

Nov. 17, 2000 — Italy bans most beef imports from France, hoping to prevent mad cow disease from speading in the country.

Nov. 18, 2000 — Greek butchers associations begin a boycott of French beef in a bid to stop a sharp decline in sales in the country, saying they would only sell Greek beef and pledging to set up blockades to stop the distribution of French imports.

Nov. 22, 2000 — Spain confirms its first case of mad cow disease and investigates a second possible case. Farms where the cows lived are quarantined.

Dec. 4, 2000 — At a special meeting, EU agriculture ministers approve a six-month ban on the use of animal products in animal feed. Germany expresses concern that the ban is too short. The EU estimates the cost of a six-month ban at $1.3 billion.

Dec. 7, 2000 — Germany, arguing that a six-month ban is too short, pushes European Union leaders to agree to make the six-month-ban on the use of animal products in fodder permanent. Germany's Chancellor Gerhard Schroeder announces a permanent ban has been ordered.

Dec. 8, 2000 — EU ministers end up supporting a six-month rather than a permanent ban on animal products in animal feed. The ministers agree to set up a food regulatory agency. They also agree to keep out of the food chain all cattle older than 30 months that have not been tested for the disease.

Dec. 19, 2000 — The French government announces it is banning blood donations of people who spent more than a year in Britain from 1980 to 1996, a precautionary measure against mad cow disease. German officials rush to reassure consumers that their sausages are safe after a European Union official hinted the country's beloved bratwurst, currywurst or even weisswurst could also be considered suspect in the mad cow disease scare.

Dec. 20, 2000 — Germany's health minister warns the public to stop eating some sausages made of meat from the backbones of cattle and calls on producers to take the products off the market, saying it was a precaution based on the recommendation of scientists.

Jan. 5, 2001 — Hoping to fend off criticism of its reaction to the panic, the German government proposes lowering the age of cows to be tested for BE, implementing tougher food safety inspections and banning animal-based feeds and risky products. Spain reports three new cases of mad cow, while Australia and New Zealand announce they will ban all beef imports from Europe.

Jan. 9, 2001 — Germany's agriculture and health ministers resign over their handling of the mad cow scare. The Belgian Federal Agency for Food Safety reports 161 cases of BSE in 2000, more than five times the number detected in 1999. French farmers block a slaughterhouse to protest the economic impact of the disease.

Jan. 16, 2001 — The European Union appeals to consumers to stay calm, despite the discovery of suspected mad cow cases in Austria, Spain, Bavaria, Belgium, and in an Italian slaughterhouse that has supplied beef for McDonald's hamburgers. Some of the suspected cases were in areas previously believed to be in the clear. The EU says it's only natural that new cases would be discovered, now that a mandatory beef testing policy is in place.

Jan. 18, 2001 — An FDA advisory panel votes to ban blood donations from anyone who lived in France, Ireland or Portugal for 10 or more years after 1980. A wider ban had been requested by the American Red Cross.

Jan. 25, 2001 — The U.S. Food and Drug Administration quarantines some cattle in Texas to investigate whether the animals ate feed made from carcasses of cows. Regulations meant to keep mad cow disease out of the United States prohibit that practice.

Jan. 26, 2001 — The U.N. Food and Agriculture Organization urged precautions worldwide against mad cow disease, saying that any country that imported cattle, meat or bone meal from Western Europe since the 1980s was at risk. Germany, meanwhile, dropped the testing age for cattle from 30 months to 24 months.

Jan. 31, 2001 — Germany said it would destroy about 400,000 cattle that may be infected with the disease. Spanish officials said they had detected three new cases of the disease, bringing to 12 the number discovered there so far.

Feb. 16, 2001 — France asks for aid for farmers affected by the mad cow scare, Germany passes a law increasing government's powers to deal with the beef emergency and Italy confirms its second case of BSE.