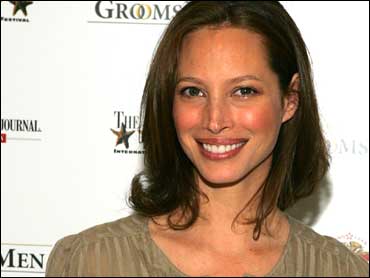 Fresh from a trip to Africa, Christy Turlington will have a lot to talk about when she sees her mother for Mother's Day this coming weekend.

The model just returned from an excursion to Swaziland, where the AIDS infection rate is the highest in the world at the moment.

She made the trip on behalf of the (RED) organization which has partnered with brands like Apple, Motorola, Gap, and Armani, to create products of which a percentage of the proceeds go to funding in Africa. U2 front man Bono co-founded the campaign in 2006.

"It was really important that I go and that I see how our money is being spent and used, and I'm happy to report that people are getting what they need and that feels amazing," Turlington said in an interview with The ShowBuzz this week.

(RED) has raised $25 million so far for projects around the globe and $11 million of it is at work in Africa now, Turlington says.

During her two-day trip she met mothers with AIDS and AIDS orphans old and young — the country is home to some 70,000 orphans.

"I was in the office at the Baylor clinic when a mother of five was told that her youngest child, 6-month-old little boy, had just tested negative. It was an amazing, amazing moment to witness," she says. "His mother was tested (and) was able to take the drugs she needed during labor and then her son was able to be given a syrup form of the same medicine. So that was an incredible thing to see. That's an incredible message, pregnant Mom's especially, are able to take medication that then prevents the mother to child transition rate. Which is a huge, huge step in changing the impact of the future."

Turlington spent time in a facility that takes care of children orphaned by AIDS. "Mother's are disappearing, a disappearing part of the population, grandmother's and aunts, and other community leaders are helping take care of the countries orphans," she says. "So we witnessed them getting lunch, they get a meal once a day, due also to some global fund programs. And they are educated about HIV and the necessity to get tested."

The most heart-wrenching part of her trip, she says, was meeting with adolescents with AIDS.

"Many of them lost their parents both of them, in the last (few years) and didn't realize what they lost them from and then are just learning now that they are also HIV positive," she says. "Their health has improved greatly because of the accessibility of the ARVs (anti-retroviral medication), so it was positive but it was also quite heart wrenching just because being a teenager is hard enough as it is and the idea of having to do all of this without your parents is quite unfathomable."

"Everybody wants a Nano, everybody wants a razor phone. The idea that their purchases, that the proceeds are going to helping people across the world from them, I think that's huge," she says. "So little goes such a long way, in that a little pin at Gap will buy somebody medicine for two days."