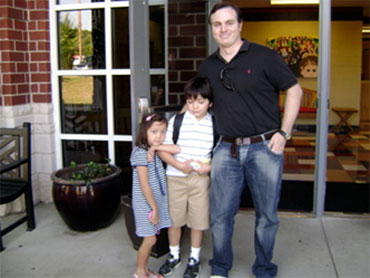 TOKYO(AP) An American father was arrested in Japan after snatching his children from his ex-wife, who had taken the kids to her native country without telling him.

The back-and-forth exposes a simmering diplomatic dispute over Japan's traditional favoritism toward mothers in custody battles. While the father was apprehended by Japanese authorities, a U.S. court has issued an arrest warrant for the mother.

Christopher Savoie grabbed his two children — an 8-year-old boy and a 6-year-old girl — while they were walking to school on Monday, forcing them into a car and driving away, Akira Naraki, a police spokesman in the southern city of Fukuoka, said Wednesday.

His former wife, Noriko, then called the police. Savoie, a 38-year-old technology executive from Franklin, Tennessee, was arrested just as he was about to enter the U.S. Consulate in Fukuoka with his children, said Tracy Taylor, a spokeswoman at the consulate.

Savoie is chief executive officer of Franklin-based Tazzle Inc. Tazzle makes data sharing devices for BlackBerry mobile phones and has an office in Tokyo that looks after manufacturing in Asia, according to the company's Web site.

The divorced couple and their children were living in Tennessee, but Noriko came to Japan with the kids in August without telling her ex-husband, Taylor said.

Christopher Savoie only discovered his children were gone when their school called him Aug. 13 to say they had not showed up, according to an affidavit filed with the arrest warrant against his ex-wife for violating the terms of custody.

Alarmed that he would no longer be able to see his children, Savoie flew to Japan to reclaim them, said Jeremy Morley, one of his lawyers.

Divorced fathers in Japan typically don't get much access to their children because of widespread cultural beliefs that small children should be with their mothers.

That stance has begun to raise concern abroad, following a recent spate of incidents involving Japanese mothers bringing their children back to the country and refusing to let their foreign ex-husbands visit them. The United States, Canada, Britain and France issued a joint statement in May urging Japan to address the problem.

"Japan is an important partner and friend of the U.S., but on this issue we have quite different points of view," said David Marks, U.S. Embassy spokesman in Tokyo.

Tennessee Gov. Phil Bredesen's office has not been contacted and has not become involved in the case, a spokeswoman said.

Japan has had close ties to Tennessee since Nissan built its first U.S. manufacturing plant in suburban Nashville in the early 1980s. Nissan relocated its North American headquarters from California to Franklin in 2006, and the Japanese consulate for five southern states was moved from New Orleans to Nashville early last year. 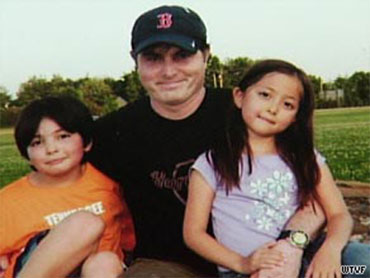 Children are increasingly caught in the middle of those legal battles as the number of divorces among couples of Japanese and foreign nationality have almost doubled to nearly 19,000 cases in 2008 from just more than 10,000 in 1998, according to the Health and Welfare Ministry.

Japan has yet to sign the 1980 Hague Convention on International Child Abduction, which seeks to ensure that custody decisions are made by the appropriate courts and that the rights of access of both parents are protected. Tokyo has argued that the Hague Convention could hinder its ability to shield Japanese women and their children fleeing abusive foreign husbands.

Tokyo is aware of the need to address the issue and is considering joining the Hague convention, said Kosei Nomura, a Foreign Ministry official in charge of international law. He said at least 70 dispute cases exist between Japan and the U.S., but the government does not have the exact number.

Because of Japan's stance, U.S. court rulings in the past have decided in favor of keeping children in that country, saying American parents would otherwise totally lose their custody right.

Local police in Japan said they received court permission to keep Savoie in custody for 10 days. He was not officially charged. American Consulate officials have twice visited Savoie, who also has a Japanese lawyer.

The Savoies were divorced in January and the mother was given primary custody of the children, while the father was granted limited time with them, according to court records.

Savoie has since remarried. His wife, Amy, told CBS's "The Early Show," that Noriko was not letting the children talk to him on the telephone after she took them to Japan.

U.S. Representative Chris Smith, a New Jersey Republican, told The Associated Press he has introduced a bill called the International Child Abduction Prevention Act of 2009, which would penalize countries that show a pattern of not cooperating to resolve such cases. Penalties could include being denied military aid and certain loans, he said.