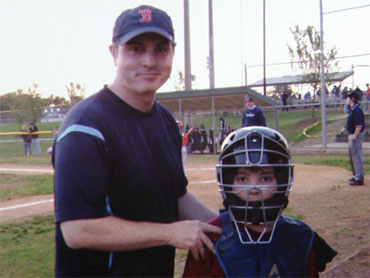 (Family Photo)
Photo: Christopher Savoie and his son Isaac in a family photo.

NEW YORK (CBS) "I'm so scared," Christopher Savoie told CNN Thursday in a jailhouse interview, speaking only in Japanese as per prison guidelines. "I don't know how long I'll be in here," he added.

Christopher Savoie, 38, is imprisoned in Japan for kidnapping his children while they were walking to school with their mother Norika Savoie. But Christopher Savoie contends that his ex-wife Norika is the real kidnapper. Back in August, she snatched the children from America and fled to Japan even though Christopher had been granted full custody by an American court.

So who is the real kidnapper?

"I want Americans to know what's happening to me," Christopher Savoie said CNN's Kyung Lah. "I didn't do anything wrong. Children have the right to see both parents. It's very important for my children to know both parents."

CBS News has been unable to reach Norika Savoie.

In the 15 minutes allowed for the interview, Christopher Savoie spoke about Japan's laws on parental kidnapping, noting that the government has sided with his estranged wife.

"Japanese people think she's the victim here," Savoie said. "In the States, my ex-wife is the one who's in the wrong."

Savoie appeared tired and worn out from the ordeal, according to CNN. With tears in his eyes, Savoie gave a message for his two children, Rebecca, 6, and Isaac, 8. "I love you, Isaac, Rebecca," he told the reporter. "Your daddy loves you forever. I'll be patient and strong until the day comes that I can see you both again. I am very sorry that I can't be with you."

The interview was almost cut short, says CNN, after Savoie blurted out in English: "I love you," a statement intended for his current wife, Amy, who is in Tennessee.

At the end of the heart-wrenching interview, Savoie bowed and through the glass divider gave a thumbs up and mouthed the words, "Thank you," according to CNN.