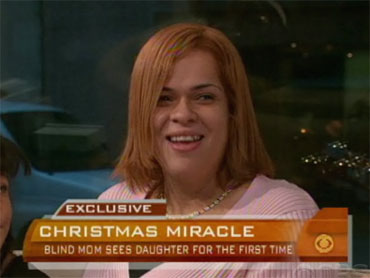 A disease, uveitis, blinded Rivera two years ago. Now, surgery has repaired one eye, enabling the Brooklyn mom to get her first look at her toddler.

Rivera tells the Daily News it was like "touching the stars and the clouds and the moon."

Rivera's 7-year-old is her biggest fan. Alayza said she didn't need presents -- she just wanted her mom to see again.

Rivera's ordeal first started in 2005, when she began experiencing blurriness in her right eye. It soon spread to her left eye and before long, she was legally blind. She lost her last bit of sight as she was delivering her second daughter, Aniahya.

"It was the worst thing," Rivera told the newspaper. "I couldn't see my child grow up ... I could listen and smell her and hear her, but I did not have the pleasure of seeing my daughter."

Rivera was also unemployed, so when she learned of the risky procedure to restore her vision, the $57,000 price tag was a stumbling block as Medicaid would only cover half of it.

But The New York Eye and Ear Infirmary donated costs not covered by Medicaid.

The chance of success was about 50/50. When the bandages came off, Rivera was so scared that she kept her eyes shut for 10 minutes. Then she screamed with joy.

"It was beautiful," she recalled. "I saw his (Doctor's) tie. I saw the computer. And then I realized, 'I'm going to get to see my kids today.'"

After Christmas, she'll have surgery on her other eye.

In an "Early Show Saturday Edition exclusive, Rivera, her children and the surgeon who performed the operation spoke with co-anchor Chris Wragge. It was, she said, like "looking at angels for the first time" when she was able to see her older daughter again and get her initial peek at her youngest one.