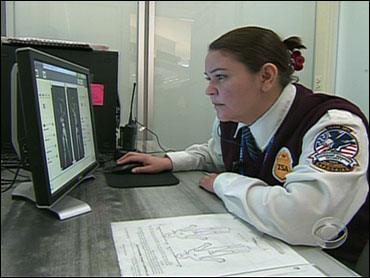 High-tech security scanners that might have prevented the Christmas Day attempt to blow up a jetliner have been installed in only a small number of airports around the world, in large part because of privacy concerns over the machines' capability to see through clothing.

The body-scanning technology is in at least 19 U.S. airports, while European officials have generally limited it to test runs.

Umar Farouk Abdulmutallab, the Nigerian accused of trying to ignite explosives aboard a Northwest Airlines jet as it was coming in for a landing in Detroit, did not go through such a scan where his flight began, at Amsterdam's Schiphol airport.

The full-body scanner "could have been helpful in this case, absolutely," said Evert van Zwol, head of the Dutch Pilots Association.

The technology has raised significant protests among privacy watchdogs because it can show the body's contours with embarrassing clarity. Those fears have slowed the introduction of the machines.

Jay Stanley, public education director for the American Civil Liberties Union's Technology and Liberty Program, said the machines essentially perform "virtual strip searches that see through your clothing and reveal the size and shape of your body."

"If you want to keep these devices off airplanes then we as a society have to give up certain of our rights," Doug Laird, a former Northwest Airlines security director, told CBS News correspondent Daniel Sieberg. "Personally I believe that is a fair tradeoff."

Abdulmutallab passed through a routine security check at the gate in Amsterdam before boarding, officials said. He is believed to have tucked into his trousers or underwear a small bag holding PETN explosive powder, and possibly a liquid detonator.

Because such items will not set off metal detectors, the U.S. Transportation Security Administration, part of the Department of Homeland Security, has begun installing two types of advanced scanning machines that provide a more detailed picture.

These machines, each of which costs in the hundreds of thousands of dollars, screen airline passengers without physical contact. They can reveal plastic or chemical explosives and nonmetallic weapons.

Such scanners "provide the best protection for the widest range of threats," said Joe Reiss, vice president of marketing for American Science & Engineering Inc. The company makes machines for prisons, military agencies, foreign customs patrols and other customers but does not have a contract with TSA.

TSA has deployed 40 "millimeter wave" machines, which use radio waves to produce a three-dimensional image based on energy reflected back from the body.

This means passengers go through the scans instead of metal detectors, although they can elect to receive a pat-down search from a security officer instead.

The remainder of the machines are being used at 13 U.S. airports for secondary screening of passengers who set off a metal detector: Atlanta; Baltimore/Washington; Denver; Dallas/Fort Worth; Indianapolis; Jacksonville and Tampa, Florida; Los Angeles; Phoenix; Raleigh-Durham, North Carolina; Richmond, Virginia; Ronald Reagan Washington National; and Detroit. Travelers can opt for a pat-down instead in those instances as well.

The agency also says it has bought 150 "backscatter" machines, which use low-level X-rays to create a two-dimensional image of the body, from Rapiscan Systems, a unit of OSI Systems Inc. Those machines, which cost $190,000 each, are expected to be deployed in U.S. airports in 2010.

"The machine gives a very accurate and very precise image of things on the body that are not the body," said Peter Kant, executive vice president of global government affairs for Rapiscan.

As a test of the backscatter technology, Sieberg hid about three ounces of fake explosives hidden on his body - the same amount Abdulmutallab smuggled onto the plane.

The machine, which costs about $100,000, picked up the small plastic bag tucked in his waistband.

Thanks to a software filter, Sieberg's face came up blurred on the resulting image. Even so, privacy experts worry that misused, the technology could become a high-tech peep show.

"The TSA has reneged on privacy assurances before, and there's no guarantee that they won't do so again," said John Verdi of the Electronic Privacy Information Center. "There's real risk here because the machines are designed and are capable of taking detailed naked images."

Last June, because of privacy concerns, the House voted 310-118 to prohibit the use of whole-body imaging for primary screening. The measure, still pending in the Senate, would limit the use of the devices to secondary screening.

"As a society, we're going to have to figure out the balance between personal privacy and the need to secure an aircraft," said Republican Rep. Jason Chaffetz, who sponsored the measure. "And there is no easy answer."

Executives at the companies that make the machines insist there are ways to strike that balance.

Kant said the technology has evolved enough to produce body images that look like chalk outlines. In addition, privacy filters can blur faces, noted Colin McSeveny, communications manager for Smiths Detection, a British company that makes millimeter wave machines that are being tested in Europe and the United States.

For its part, TSA said it safeguards privacy by ensuring that all full-body images are viewed in a walled-off location not visible to the public. In addition, the security officer assisting the passenger cannot view the image and the officer who views the image never sees the passenger. Also, the machines cannot store, print or transmit any images they produce.

After all, McSeveny said, "all they are looking for is something that shouldn't be there."

In addition to the scanning machines in place or recently purchased by TSA, the agency says it plans to buy 300 more.

In Europe, however, the European Union Parliament voted in October 2008 for more study of privacy before authorizing the machines' full deployment in European airports.

Amsterdam's airport has been running a test project with full-body scanners for three years, mainly for a few European flights. One machine being tested there for the past five weeks, made by L-3, is designed to enhance passengers' privacy by having software, rather than a human, analyze the image generated by the scanner. If the software detects an anomaly - something strapped to a leg, for instance - it alerts a human screener to look at the person's leg directly.

"So nobody sees any images," said Ron Louwerse, the airport's chief of security. "The results are very, very good. I'm very confident about it."

In May, TSA abandoned "puffer machines" made by General Electric Co. and Smiths Detection, which blew air onto passengers to dislodge trace amounts of explosives. The government said the machines cost too much to maintain and regularly broke down when exposed to dirt or humidity. There are still 18 puffer machines deployed at U.S. airports.