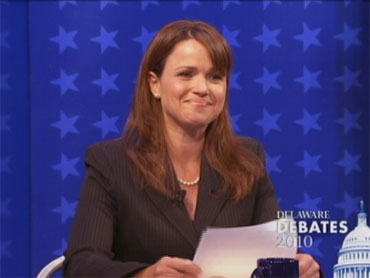 Delaware Republican Senate candidate Christine O'Donnell said during a debate Wednesday night that her opponent is "jealous" that he has not been portrayed on "Saturday Night Live."

O'Donnell, who has made national headlines over her past statements and campaign ads, has twice been portrayed on the late-night comedy show.

Video of the moment at left.

O'Donnell's opponent, Democrat Chris Coons, was speaking after debate moderators raised O'Donnell's past financial difficulties. Shortly after Coons suggested that such issues are a "distraction" and should not be the focus of the campaign, O'Donnell interjected, smiling, "you're just jealous that you weren't on 'Saturday Night Live.'"

Coons responded somewhat awkwardly, stating that "I'm dying to see who's going to play me, Christine."

The relatively lighthearted moment came during a contentious debate in which the two candidates sparred over education, the national debt, immigration, health care and Afghanistan, among other issues.

Coons opened with a suggestion that O'Donnell holds "extreme positions" that should concern Delaware voters, while O'Donnell later referred to Coons' "Marxist beliefs," prompting Coons to say, "I am not now, nor have I ever been, anything but a clean-shaven capitalist."

A CNN/Time poll released on the day of the debate found Coons leading O'Donnell 57 percent to 38 percent among likely Delaware voters.