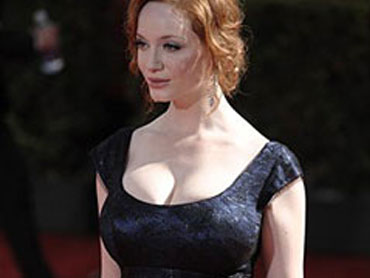 (CBS) Voluptuous "Mad Men" star Christina Hendricks has come under fire for her weight throughout her career - but unlike other Hollywood stars that seem obsessed with being thin, she says she  felt even sexier when she was 15 pounds heavier.

In the current issue of Health, the 35-year-old waxes nostalgic about her modeling days in Italy.

But curves like Hendricks' can be few and far between among the Hollywood elite, and the hour-glass shaped beauty definitely gets attention. And not always the good kind.

The criticism hurts her feelings, she told New York Magazine in February. "Anytime someone talks about your figure constantly, you get nervous, you get really self-conscious, " she said. "I was working my butt off on the show, and then all anyone was talking about was my body."

Hendricks plays Joan Holloway, the office bombshell who keeps the men who want her, and the secretaries who depend on her, in check.

In an early episode a prim and plain new secretary (actress Elizabeth Moss) lashes out at Holloway and informs her that she is "hardly a stick."

Joan Holloway responds, in her trademark frosty and pointed way,  "And yet, I never wonder what men think of me."

Holloway, and the actress who plays her, may exude confidence, but the A-lister gets slammed regularly by the body police. "You don't put a big girl in a big dress," fashion critic Cathy Horyn wrote in a recent New York Times story about the dress Hendricks wore to the Golden Globes.