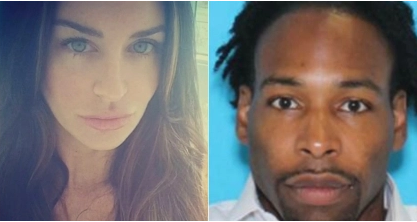 ARDMORE, Pa. -- A man who was recently released from prison was arrested Wednesday in the strangulation slaying of a model in one of Philadelphia's affluent Main Line suburbs, authorities said. Jonathan Wesley Harris, 30, was charged with first-, second- and third-degree murder along with robbery, theft and related offenses in the Aug. 22 slaying of Christina Carlin-Kraft.

Harris was arrested as he got off a bus in Pittsburgh, Lower Merion Township police and the Montgomery County prosecutor said.

"It was a violent death and we are going to pursue justice in this case," Montgomery County District Attorney Kevin Steele said during a press conference Wednesday, according to CBS Philly.

Officials said Kraft, 36, took a ride-hailing service to Philadelphia and met Harris, and the two later returned to her Ardmore apartment, into which she had moved the previous week.

Police said Kraft's killer met her on the night she died. He sent text messages to a friend saying, "I just met this sexy a** white b****, at her house in Ardmore now." That text message was sent at 2:40 a.m. on the morning she died, CBS Philly reported.

Steele said a violent struggle ensued inside the apartment, where Kraft was beaten and strangled.

Kraft's body was found in her bloodstained bedroom after police went to check on her. An autopsy indicated that her nose was fractured and she died of ligature strangulation.

"Christina was beaten and the beating was substantial. There was a lot of blood," Steele said.

An attorney wasn't listed for Harris in court documents. A listed number for him couldn't be found.