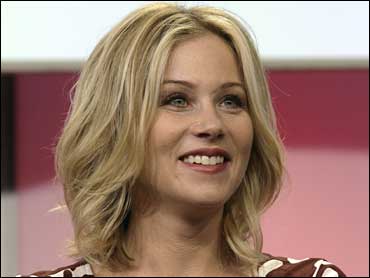 Christina Applegate is undergoing treatment for breast cancer, but the disease was caught early and the actress is expected to fully recover, her publicist said.

The Emmy winner's cancer was detected through an MRI ordered by a doctor and is not life-threatening, publicist Ame Van Iden said in a statement Saturday.

Applegate is scheduled to appear on a one-hour television special, "Stand Up To Cancer," to be aired on ABC, CBS and NBC on Sept. 5 to raise funds for cancer research.

The 36-year-old actress has been nominated for an Emmy and a Golden Globe for the show "Samantha Who?", in which she plays a woman who wakes from a coma with no memory of who she is.

The show, which debuted last October, marked a return to series television for Applegate, who helped establish the Fox network in 1987 as ditzy teenager Kelly Bundy on "Married ... With Children." The raunchy comedy ran 11 seasons and has been airing in syndication since.

"I'm really grateful that acting is the job that was chosen for me," Applegate told The Associated Press in April. "I get really lost when I'm not working. I don't know what I'm supposed to do with myself. Thank God for dance class and the New York Times crossword puzzle and 'American Idol.' But acting is what I really have to do."

Applegate won an Emmy as outstanding guest actress in a comedy series in 2003 for her role as one of Jennifer Aniston's younger sisters in "Friends." She was nominated for a Tony in 2005 for the Broadway musical "Sweet Charity."

Applegate began acting in films and television as a child and has appeared in such shows as "Quincy," "Family Ties," "21 Jump Street," "Charles in Charge" and Steven Spielberg's "Amazing Stories."

Soon after "Married ... With Children," she starred in "Jesse," playing a single mother raising a young son. The show lasted two seasons.

Her films include "Don't Tell Mom the Babysitter's Dead," "Wild Bill, "Wonderland" and "Anchorman: The Legend of Ron Burgandy."