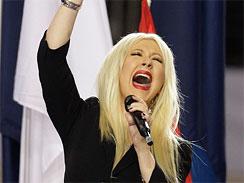 NEW YORK - has been invited to sing a do-over.

The Brooklyn Cyclones are offering the Staten Island native a chance to perform "The Star-Spangled Banner" before one of the minor league baseball team's home games this summer.

Aguilera botched one of the linesof the national anthem before Sunday's Super Bowl in Arlington, Texas. The New York Mets' Class A farm team extended the invitation Tuesday.

Christina Aguilera Flub: What Was Inside Her Mind?

Cyclones general manager Steve Cohen said in a statement that "when a player makes a mistake, they usually don't get a shot at redemption, but with a singer, that's a different story."