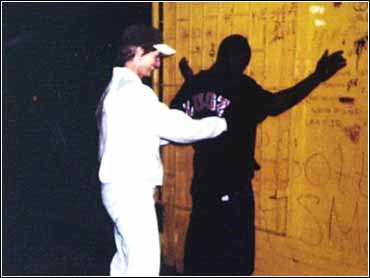 That sound you hear may be a rising star of the GOP crashing to earth in a rain of racial controversy, knocked off her upward trajectory by a single, shocking image.

It's been a bad couple of days for Christine Todd Whitman, the second-term governor of New Jersey, since a 1996 photograph surfaced that shows her frisking a Camden, N.J. black man who was detained by police for "suspicious activity." The toothy Whitman appears to be grimacing or laughing while she plays cop.

The photo was taken by a police officer during a two-night ride-along Whitman took to learn more about crime and law enforcement in Camden, the poorest and most crime-plagued city in the Garden State.

"It's not reflective of our governor," says Tom Kean, who was New Jersey's two-term Republican governor in the '80s. "The implication there is not accurate - it's not the Christie Whitman I know. But she was foolish to do it."

New Jersey Congressman Bob Menendez, a Democratic House leader, had stronger words for Whitman's star turn at Law & Order: "I was shocked by the photograph. The governor's smiling sends the wrong message about the seriousness of what was going on," he says.

The photo has prompted New York-based black activist Rev. Al Sharpton to announce he will organize protests at the upcoming Republican National Convention set to begin in less than three weeks in Philadelphia, across the Delaware River from Camden. Last year, Sharpton was arrested for leading a protest against racial profiling that shut down the Atlantic City Expressway.

Whitman has not apologized for frisking the man. She told reporters that the photo does not implicate her in racial profiling. "It was what it was. It had absolutely nothing to do with racial profiling," she said.

The governor only concedes that it is "legitimate to say, 'You should have thought twice.'"

"I don't think it needs any more explanation why it took her so long to understand the outrage over racial profiling. She herself engaged in it," he said.

Last year, Whitman acknowledged that New Jersey state troopers were engaged in "racial profiling" and she fired a high-ranking state police official who told a journalist that minorities were "most likely" the people involved in drug trafficking.

The ensuing investigation made New Jersey the first state to confront racial profiling, and put the issue at the center of a national debate about racism and brutality among police - a debate that was stoked by the Los Angeles corruption cses and the shooting death of an unarmed man by four New York City police officers.

Kean, who won 60 percent of the black vote his second time around, said the photo is "a setback to credibility of the [Whitman] administration, which is unfortunate because the Attorney General of New Jersey had gained a lot of credibility in the minority community for dealing responsibly with this question and perhaps setting [an example] for other states" for dealing with racial profiling by police.

Whitman first made her name in national politics 10 years ago when she almost unseated Democrat Bill Bradley from the U.S. Senate. In the 1993 governor's race, Whitman toppled incumbent Democrat Jim Florio in a hard-fought campaign fueled by a tax revolt and became a sort of moderate darling of the party.

A moderate, pro-choice female face from the Northeast in a time when conservative Southern men were ascendant in the party, she delivered the Republican response to President Clinton's State of the Union address on national television in 1995. In 1996, when Republicans nominated Bob Dole for president, The New York Times said Whitman "appeared at the convention podium so often that at times it seemed like 'This Week with Christie Whitman.'"

Whitman has been mentioned as a possible running mate for GOP presidential candidate George W. Bush, the Texas governor who's aggressively courting minority votes. She's the only Republican woman other than Elizabeth Dole whose name has come up. But she was always a long shot. Now? Fuggedaboutit, as they say in Jersey.

If Reverend Al has his way, this "rising star" known to political junkies may become the most notorious New Jerseyan since Tony Soprano.