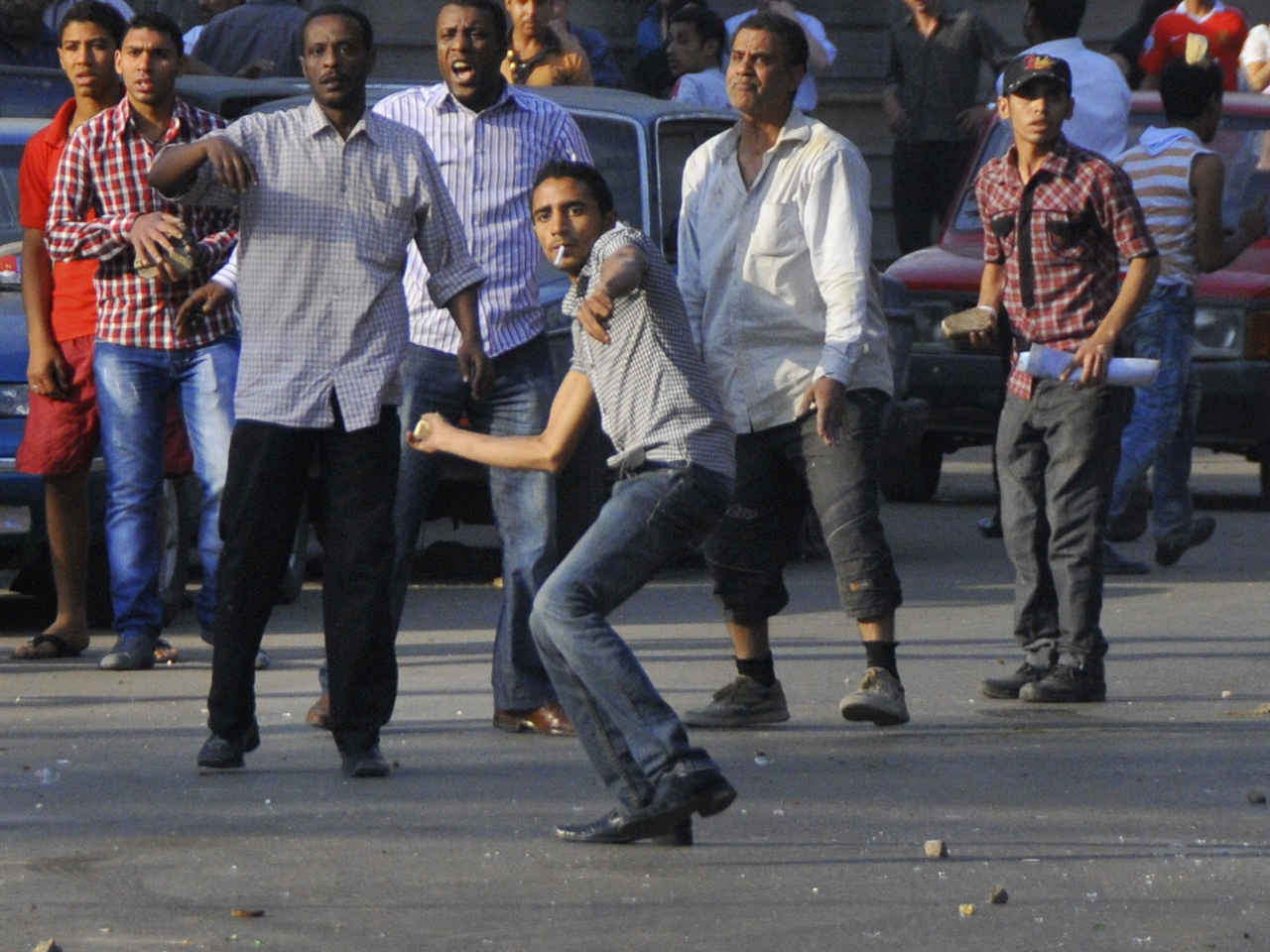 CAIRO - Relations between Egypt's Muslims and Christians have degenerated to a new low after riots left 12 people dead and a church burned, adding to the disorder of the country's post-revolution transition to democracy.

The attack on the church was the latest sign of assertiveness by an extreme, ultraconservative movement of Muslims known as Salafis, whose increasing hostility toward Egypt's Coptic Christians over the past few months has met with little interference from the country's military rulers.

Salafis have been blamed for other recent attacks on Christians and others they don't approve of. In one attack, a Christian man had an ear cut off for renting an apartment to a Muslim woman suspected of involvement in prostitution.

The latest violence, which erupted in fresh clashes Sunday between Muslims and Christians who pelted each other with stones in another part of Cairo, also pointed to what many see as reluctance of the armed forces council to act. The council took temporary control of the country after President Hosni Mubarak was deposed on Feb. 11.

After the overnight clashes in the slum of Imbaba, residents turned their anger toward the military. Some said they and the police did almost nothing to intervene in the five-hour frenzy of violence.

Analysts warned of signs of Coptic violence, especially with reports that some Christians have opened fire at Muslims.

"The Coptic volcano is exploding," Coptic expert Youssef Sedhom said. "How would Copts respond if they find their back to the wall facing guns? They would have no option but self defense," adding, "don't blame Copts for what they do."

Six Muslims were among the dead, according to Egypt's state-run news agency.

The bloodshed began Saturday around sundown when word spread around the neighborhood that a Christian woman who married a Muslim had been abducted and was being kept in the Virgin Mary Church against her will.

Islamic extremists declared the crowded district a state within a state in the 1990s, calling it "the Islamic Republic of Imbaba," one of the country's hottest spots of Islamic militancy.

The report of the kidnapping, which was never confirmed by local religious figures, sent a large mob of Muslims toward the church. Christians created a human barricade around the building and clashes erupted. Gunfire sounded across the neighborhood, and witnesses said people on rooftops were firing into the crowd.

The two sides accused each other of firing first.

Crowds of hundreds of Muslims from the neighborhood lobbed firebombs at homes, shops and the church. Residents say Christians were hiding inside. Muslims chanted: "With our blood and soul, we defend you, Islam."

Rimon Girgis, a 24-year-old with a tattoo of a Coptic saint on his arm, was among the Christians who formed a human shield around the church.

"They were around 40 bearded men chanting slogans like 'There is no God but Allah.' After rallying Muslim residents, they opened fire," he said. "We Copts had to respond, so we hurled stones and pieces of broken marble."

Some of the wounded were carried to the nearby St. Menas Church, where floors were still stained with blood hours later.

"Every five minutes, an injured person was rushed into the church," said Father Arshedis. "We couldn't reach ambulances by phone. We called and no one answered. We tried to treat the injured. We used the girls' hair clips to extract the bullets."

"The army is responsible because they took no action," he said.

Later the same night, the Muslim crowd moved to a Christian-owned apartment building nearby and set it on fire. Piles of charred furniture, garbage and wood were mixed with remains of clothes, food and shoes. Shops on the ground floor of the buildings were destroyed.

Some soldiers and police did fire tear gas, but failed to clear the streets for hours.

By daybreak, the military had deployed armored vehicles and dozens of troop carriers to cordon off a main street leading to the area. They stopped traffic and turned away pedestrians. Men, women and children watching from balconies took photos with mobile phones and cheered the troops.

TV images showed both sides furiously throwing stones, including one Christian who held a large wooden cross in one hand while flinging rocks with the other.

Scores were injured, but an army unit securing the TV building did nothing to stop the violence, Tamri said.

Late Sunday thousands of Copts decided to camp out in front of the TV building overnight to press demands to bring the arsonists to justice and to make religious instigation a criminal offense.

"These events do not benefit either Muslim or Copts," Ahmed al-Tayyeb, the sheik of al-Azhar, told the daily Al-Ahram.

During the 18-day uprising that ousted Mubarak, there was a rare spirit of brotherhood between Muslims and Christians. Each group protected the other during prayer sessions in Cairo's Tahrir Square, the epicenter of the revolution.

But in the months that followed, there has been a sharp rise in sectarian tensions, as the once quiescent Salafis have become more forceful in trying to spread their version of an Islamic way of life. In particular, they have focused their wrath on Egypt's Christians, who make up 10 percent of the country's 80 million people.

On Friday, a few hundred Salafis marched through Cairo to praise al Qaeda leader Osama bin Laden and condemning the U.S. operation that killed him.

Critics say Egyptian military authorities have done too little to stem the religious violence. But authorities arrested 190 people after the church attack, sending them to military prosecutions and threatening the maximum penalty against anyone attacking houses of worship.

Copts complain of widespread discrimination, including tight restrictions on building or repairing churches, while Muslim places of worship do not face such limits.

In one of the worst attacks against them, a suicide bomber killed 21 people outside a church in the port city of Alexandria on Jan. 1, setting off days of protests. Egypt made some arrests but never charged anyone with the attack.

Tensions have been building for the past year as Salafis protested the alleged abduction by the Coptic Church of a priest's wife, Camilla Shehata. The Salafis claim she converted to Islam to escape an unhappy marriage — a phenomenon they maintain is common.

Because divorce is banned in the Coptic Church, with rare exceptions such as conversion, some Christian women resort to conversion to Islam or another Christian denomination to get out of a marriage.

Shehata's case was even used by Iraq's branch of al Qaeda as a justification for an attack on a Baghdad church that killed 68 people and other threats by the group against Christians.

On Saturday just before the violence erupted in Imbaba, Shehata appeared with her husband and child on a Christian TV station broadcast from outside of Egypt and asserted that she was still a Christian and had never converted.

"Let the protesters leave the Church alone and turn their attention to Egypt's future," she said from an undisclosed location.

In the Egyptian Sinai desert, hundreds of Bedouins forced authorities to set free a prisoner after laying siege to the main courthouse, firing gunshots in the air and burning tires, witnesses said.