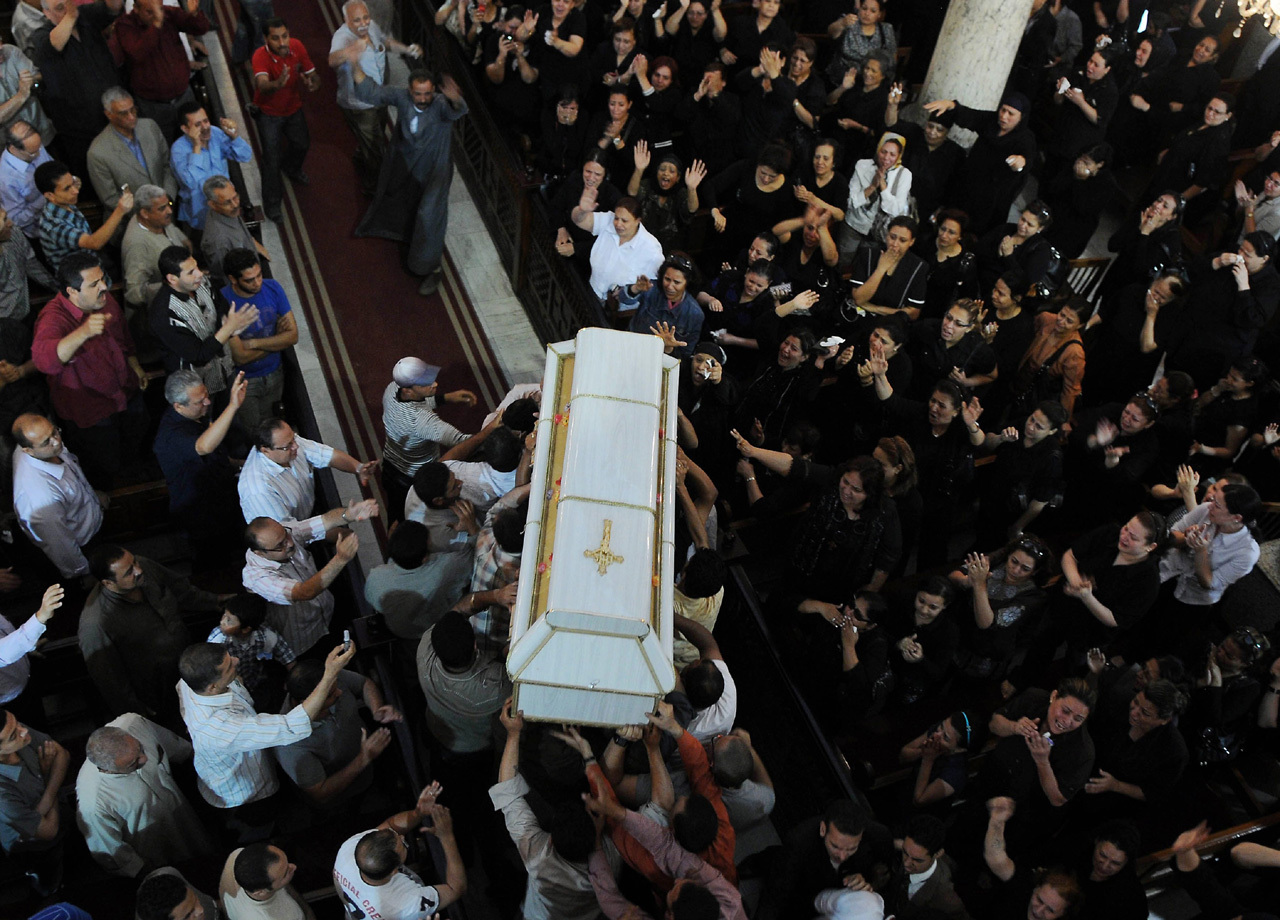 CAIRO — Hundreds of Egyptians, many of them Coptic Christians, demonstrated on Monday in Cairo to protest Muslim-Christian clashes that left 12 dead and a church burned.

Demonstrators, who numbered about 1,000 by midday, said they feared that some in Egypt seek to create an Islamic state that would marginalize the Christians, who make up about 10 percent of Egypt's nearly 80 million population. Most are Coptic Christians.

Some of the protesters gathered outside the building that is headquarters for state-run TV criticized the army's handling of the weekend clashes and demanded that the military ruler step down. Some stones were thrown toward the building, but the protest was largely peaceful.

"We don't want to bury our heads in the sand," said Rami Kamel, a Coptic protester. "The issue is bigger than rebuilding a church or arresting the culprits. This is Egypt's fate. Is Egypt becoming a religious state or can we change course and opt for a civil state?"

The demonstration came as authorities on Monday detained 23 Egyptians, including 2 blamed for sparking the riots starting late Saturday that marked a new low in Muslim-Christian relations.

Egypt's military rulers are hard-pressed to deal with the sectarian tensions which have emerged as one of the major challenges in the post-revolution transition following the February ouster of President Hosni Mubarak.

Some of the Christian protesters camping outside the state TV building have demanded that measures be taken to control an increasingly assertive ultraconservative movement of Muslims known as the Salafis, which they say orchestrated the weekend riots in the neighborhood of Imbaba.

Last month, tens of thousands of Egyptians led by Islamists believed to be affiliated with the Salafis demonstrated to protest the appointment of a Coptic Christian governor in southern Egypt.

The latest riots, sparked by a rumor that a Muslim convert was abducted by the local church, lasted for hours Saturday night and into Sunday morning. Muslim mobs attacked two churches, burning one; 12 people died, and more than 200 were injured.

Above: Egyptian Coptic Christians carry the coffin of a victim of sectarian clashes during a funeral in Cairo, May 8, 2011. (AFP/Getty Images)

Later in the day, Muslims and Christians pelted each other with stones in another part of Cairo.

Police and soldiers moved in to break up the violence, but it was hours that they effectively cleared the streets around the churches — a delay that prompted neighborhood criticism for perceived military reluctance to interfere.

But authorities arrested 190 people after the church attack, sending them to military prosecutions and threatening the maximum penalty against anyone attacking houses of worship.

Among those arrested on Monday were Yassin Thabet, 31, who claimed his wife is held against her will in the church. The authorities also detained the owner of the coffee house opposite the church; witnesses said gunfire originated there.