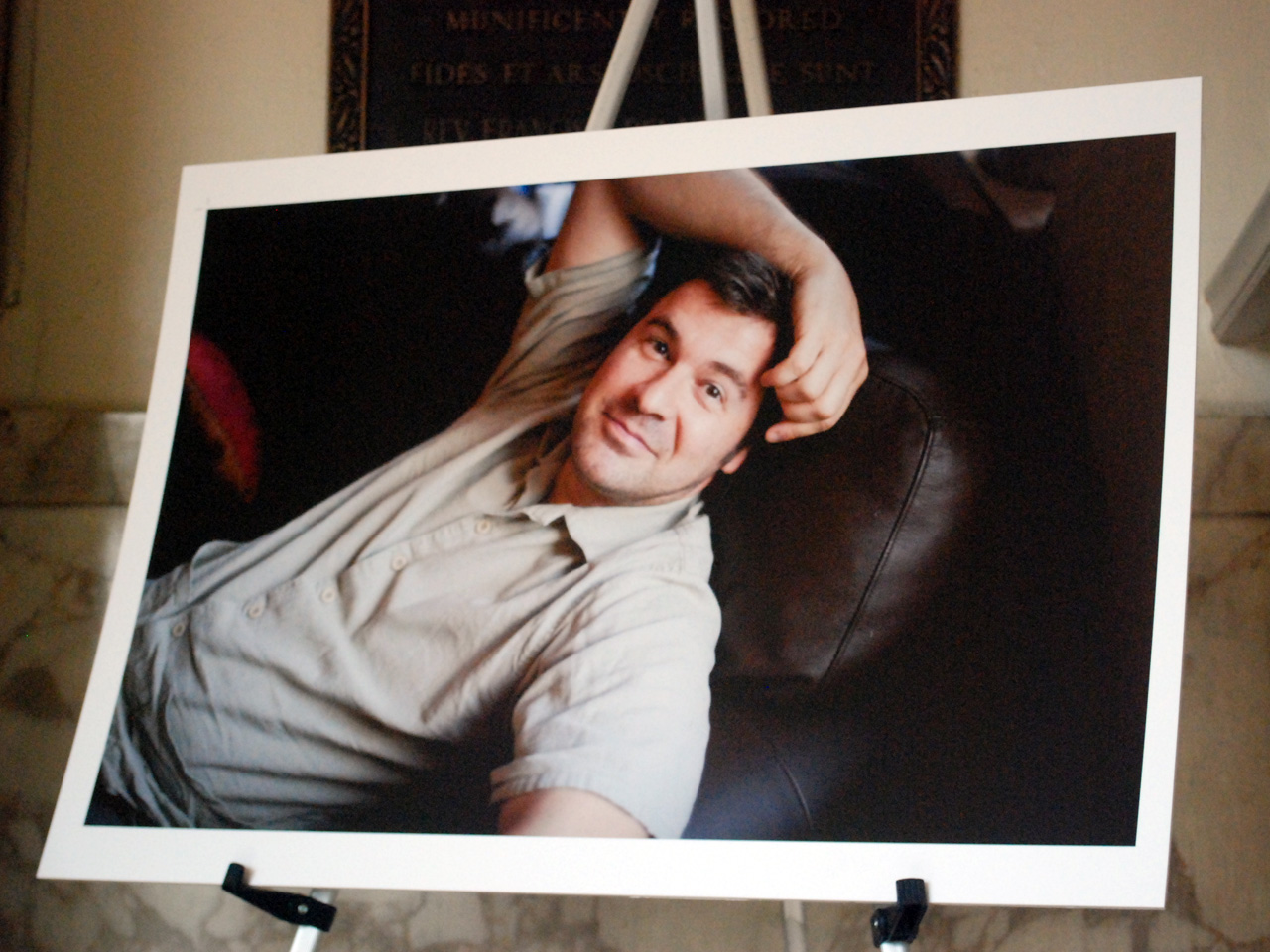 by Jennifer Janisch for CBSNews.com

BROOKLYN - Chris Hondros, the renowned American war photojournalist who captured images of conflicts from Iraq and Afghanistan to Liberia and Libya, was honored in a Brooklyn memorial service today. Hondros and "Restrepo" director Tim Hetherington were killed in Libya last week. The two were hit by a rocket-propelled grenade on April 20 during intense fighting between rebels and government forces in Misrata, Libya.

An Ukrainian doctor was also killed during the fighting, and two other photojournalists were injured, but survived.

The service took place at the Sacred Hearts & St. Stephens Church in the Carroll Gardens neighborhood of Brooklyn amidst hundreds of family, friends, and colleagues, bouquets of blue, yellow, and purple spring flowers, and the music of Bach, Beethoven, and Mahler. Hondros was remembered not only for his powerful war images, but as a humanitarian who was committed to telling the stories of the silenced, the living and the dead alike.

Father Anthony J. Sansone, who presided over the service, called Hondros a "prophetic witness," who was able to maintain the strength and courage necessary to do his work, because of the "heart of his conscience."

"(Hondros) never ran away from reality," said Father Sansone. "He was present there all the time."

Hondros was on assignment for Getty Images in Misrata when he was struck by the mortar, along with Hetherington, who died from his injuries moments after arriving at a Misrata hospital. Hondros was revived twice but died hours later due to a severe head injury. Shortly before his death, Hondros filed a number of photographs of the intense battle.

Due to be married to Christina Piaia, just months from now in the same church where his memorial was held today, attendees wept as Piaia spoke of her love for her fiancee.

"Oh, how I wish this were our wedding day," she said.

Best known for his photograph of a Liberian militiaman jumping into the air in exaltation after firing an RPG, and his shot of a young Iraqi girl crying alone, covered in her parents' blood after U.S. soldiers fired on her family's car when it didn't stop at a checkpoint. Hondros was often lauded for capturing both the thrill and the horror of war.

He was also regarded as a generous humanitarian who never forgot the people he photographed. Two years after capturing the photo of the Liberian commander, Hondros returned to the country to track him down, finding 28-year-old Joseph Duo lost without a purpose in peacetime. Hondros revisited the bridge with Duo and paid for his tuition at a computer school.

In an essay for The Digital Journalist, Hondros later wrote "Maybe the scars of a lifetime of horror and bloodshed are too deep to heal. But maybe not. And in any case, the future of Joseph Duo is, for the first time ever, in his own hands."

A funeral for Hondros will be held Saturday in Fayetteville, North Carolina.

In lieu of flowers, the loved ones of Chris Hondros have requested donations be made to The Chris Hondros Fund, which will provide scholarships for aspiring photojournalists and raise awareness of issues surrounding conflict photography.