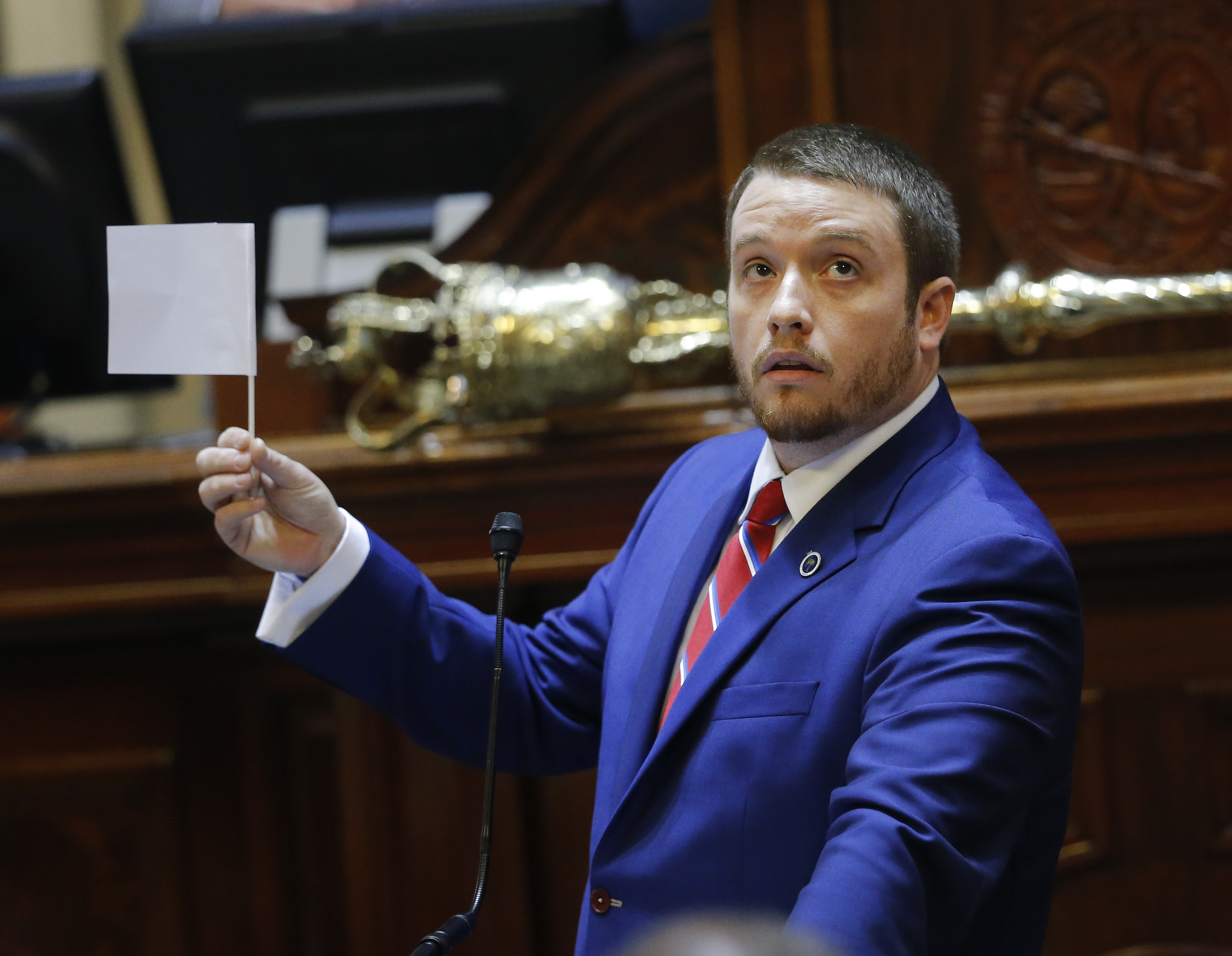 AIKEN, S.C. — A former South Carolina legislator is expected to plead guilty Monday to a domestic violence charge in an attack on his wife, a felony that could land him in prison for a decade.

Attorneys for Chris Corley have informed state prosecutors their client is planning to change his plea to guilty during a hearing in Aiken, according to Robert Kittle, spokesman for the state Attorney General's Office. He's expected to plead guilty to first-degree criminal domestic violence, which carries a sentence from probation to 10 years in prison.

His wife, Heather Corley, prepared a statement to be read to Judge Doyet A. Early III asking for leniency. She blames a previously undiagnosed bipolar disorder for his behavior, according to the Aiken Standard, which obtained a copy from her lawyer.

A grand jury initially indicted the 36-year-old lawmaker on aggravated domestic violence - the state's toughest category of such crimes, punishable by up to 20 years in prison - enhanced when the alleged abuse occurs in the presence of children.

The Republican from Graniteville had just been elected to a second term when authorities say he attacked his wife during an argument over his infidelity the day after Christmas. In a police report, authorities said the couple's young children were present when Corley attacked his wife, biting her nose bloody and pointing a gun at her.

Corley's wife said he stopped hitting her only after noticing she was bleeding and hearing the children screaming, authorities said. Prosecutors said he took away his wife's cellphone to keep her from summoning help, but that she managed to call 911 on her Apple Watch.

Authorities said that after Corley threatened to kill her and then said he'd kill himself, his wife took the children to her mother's house across the street.

Local solicitors asked Attorney General Alan Wilson to take over the domestic violence case. Suspended from the state House after his indictment, Corley resigned his seat a month after his arrest, as lawmakers prepared to introduce legislation calling for his expulsion.

Heather Corley had begged prosecutors to drop the case or allow him to plead guilty to a lesser charge that would enable him to keep his law license.

She said they need his income as a lawyer to support their three children. The Attorney General's Office said it would move forward with the criminal case.

"None of this was my intention," she said in the statement. "I only wanted my husband to get the help he needed. We sought medical help for his mental state for one year. As the year progressed, it became increasingly worse. He has since been diagnosed with bipolar disorder, and the medications he was taking, which were prescribed, were increasing and prolonging manic stages which caused his behavior to become erratic."

She said that he's been in treatment since January and "we have our Chris back."

Heather Corley also said she feels her husband was "coerced into this plea" when the Attorney General's Office subpoenaed their 8-year-old daughter to testify against her father if the case goes to trial. He "would do anything to protect our baby girl from the psychological damage that would inflict," she wrote.

As a legislator, Corley voted against South Carolina's stronger domestic violence laws in 2015, saying he didn't think guns should be taken away from people charged in abuse cases.

Corley may be best known in the House as a staunch defender of the Confederate flag. After the flag was removed from Statehouse grounds in July 2015, following the massacre of nine black churchgoers by a self-avowed white supremacist who embraced the flag, Corley sponsored a bill for a statewide vote on whether to return it. The bill went nowhere.

He also sent a Christmas card with the Confederate flag on it to Republican lawmakers after the flag came down, suggesting they "ask for forgiveness of all your sins such as betrayal," calling it a joke in his smart-aleck style. He sent a different card to Democrats, showing a photo of his children.