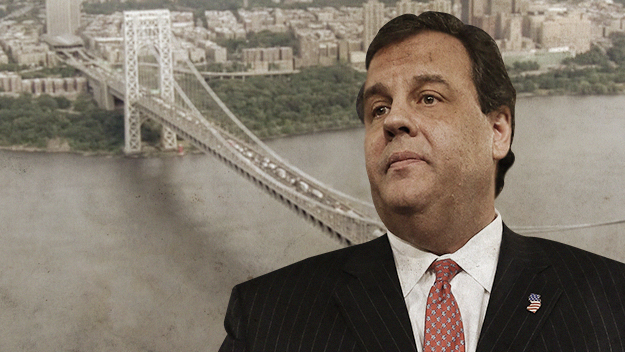 Updated at 5:55 p.m. ET
Gov. Chris Christie, R-N.J., knew about the lane closings on the George Washington Bridge as they were happening, the attorney for the former Port Authority official who oversaw the closings said Friday, adding that "evidence exists" to prove it, the New York Times first reported.
The attorney for David Wildstein, who was appointed by Christie to the Port Authority and later resigned after the scandal broke, said in a letter released that "evidence exists as well tying Mr. Christie to having knowledge of the lane closures, during the period when the lanes were closed, contrary to what the governor stated publicly in a two-hour press conference."
“Mr. Wildstein contests the accuracy of various statements that the governor made about him and he can prove the inaccuracy of some,” the letter added.
The Christie administration responded late Friday afternoon with a written statement, which said: "Mr. Wildstein's lawyer confirms what the Governor has said all along - he had absolutely no prior knowledge of the lane closures before they happened and whatever Mr. Wildstein's motivations were for closing them to begin with.  As the Governor said in a December 13th press conference, he only first learned lanes were closed when it was reported by the press and as he said in his January 9th press conference, had no indication that this was anything other than a traffic study until he read otherwise the morning of January 8th. The Governor denies Mr. Wildstein's lawyer's other assertions.”
Christie said during a two-hour-long Jan. 9 news conference that he "had no knowledge of this - of the planning, the execution or anything about it - and that I first found out about it after it was over," adding he also didn't know that anyone on his staff was involved in the closings until the day before the news conference.
Previously, in a Dec. 13 news conference, Christie said, "The first I ever heard of the issue was when it was reported in the press ... I think that was the first I heard of it. But it was certainly well after the whole thing was over before I heard about it."
Meanwhile, the Newark Star-Ledger's editorial board released a scathing editorial Friday after the release of Wildstein's attorney's letter writing, "If this proves to be true, then the governor must resign or be impeached. Because it will show that everything he said at his famous two-hour press conference was a lie.
What seemed to be a poorly planned lane closure to conduct a traffic study in September exploded into a full-blown scandal earlier this month after a series of communications between a Christie aide and two of his political appointees to the Port Authority became public. The email and text messages suggested that Bridget Anne Kelly, one of Christie’s three deputy chiefs of staff, ordered the lane closures.

"Time for some traffic problems in Fort Lee," Kelly wrote in an Aug. 13 message to Wildstein.

"Got it," replied Wildstein, who later resigned as a result of the outburst of anger surrounding the lane closings.