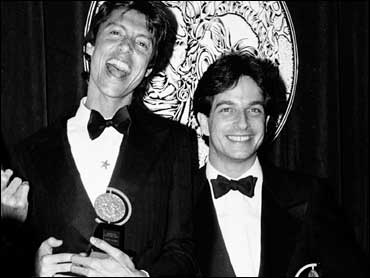 Thommie Walsh, a Tony-winning choreographer who was in the original Broadway cast of "A Chorus Line," has died after a long battle with lymphoma. He was 57.

Walsh was best known for creating the role of Bobby in "A Chorus Line," Michael Bennett's backstage look at dancers' auditions for a big Broadway musical. The show based on dancers' real-life stories opened at the Public Theater off-Broadway in April 1975 before moving to Broadway's Shubert Theatre for a 6,137-performance run.

Using the name Thomas J. Walsh, he made his Broadway debut in "Seesaw," in 1973, dancing in the chorus of the Cy Coleman-Dorothy Fields musical directed and choreographed by Bennett. The show featured performer Tommy Tune, who later teamed with Walsh on several musicals.

The two co-choreographed "The Best Little Whorehouse in Texas" (1978) and then "A Day in Hollywood/A Night in the Ukraine" (1980), for which they received a Tony Award for best choreography. Tune and Walsh also co-directed and co-choreographed "My One and Only" (1983), a new musical using old Gershwin songs and which starred Tune and Twiggy. It also won the duo a choreography Tony.

Among his later projects were directing and choreographing the 2001 national tour of "The Best Little Whorehouse in Texas," starring Ann-Margret.

Funeral services were set for Saturday in Auburn. A New York memorial was planned, Duva said.