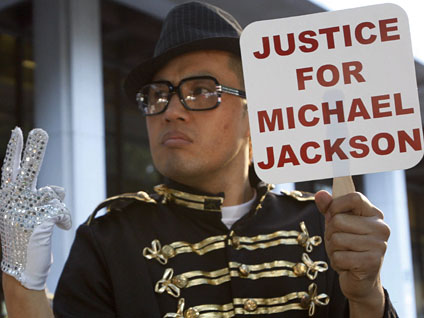 LOS ANGELES (AP) - Choreographer Kenny Ortega, the last person to work with Michael Jackson on his ill-fated concert tour, told a judge Tuesday the superstar seemed unwell and not in condition six days before he died and went home early from rehearsals at Ortega's suggestion.

Ortega said he was summoned the next morning to Jackson's home and told by Dr. Conrad Murray to not try to be Jackson's doctor or psychiatrist. Murray suggested Jackson should not have been sent home because he was physically and emotionally fine, Ortega testified.

The testimony came during a preliminary hearing to determine if Murray, the singer's personal physician, will be tried on a charge of involuntary manslaughter.

Deputy District Attorney David Walgren said in his opening statement that Jackson was already dead when Murray summoned help and tried to conceal his administering of the powerful anesthetic propofol to the pop star, ordering a bodyguard to collect items before paramedics were called.

Ortega, who later directed the Jackson concert film "This Is It" based on rehearsal footage, said Jackson was in good spirits through most of the rehearsals and was excited about the progress being made in preparation for the London comeback shows.

In the days before Jackson's death, he said, the singer told him there was nothing to worry about and gave him a big hug.

Ortega said he became concerned on June 19, 2009, when Jackson arrived at Staples Center for rehearsal.

"He didn't look well at all. Michael was chilled and soft-spoken. ... He wasn't in the kind of condition to be at rehearsal," Ortega said.

Under questioning by the prosecutor, Ortega described Jackson and their conversation.

"He appeared really lost. It was scary. I couldn't put my finger on it. I said, 'Michael, is this the best place for you to be or do you want to go home and be with your family?"' Ortega said.

Walgren, however, said during his opening statement that Jackson had a "fabulous" rehearsal two days before his death and was set to go to London in a few days.

Jackson died on June 25. Authorities contend Murray gave him a lethal dose of propofol and other sedatives in the bedroom of his rented mansion.

"The evidence will show through the expert testimony, by all accounts, Michael Jackson was dead in the bedroom at 100 North Carrolwood prior to the paramedics arriving," Walgren said.

Murray had been giving Jackson propofol, an anesthetic normally administered in hospital settings, six nights a week for roughly two months before his death, the prosecutor said.

Jackson's personal assistant Michael Amir Williams testified Tuesday about the chaotic scene at the singer's rented mansion and a hospital on the day he died.

Williams recounted Murray calling him and frantically asking him to get help from bodyguards for the singer, who was in a bedroom. Murray told him the singer had a "bad reaction" and that immediate help was needed, but the doctor didn't ask him to call 911, Williams said.

Murray's attorney, Ed Chernoff, declined to give an opening statement at the hearing.

Jackson's mother Katherine and his sister LaToya and brother Jermaine attended the proceedings.

At the end of the multi-day hearing, a judge will determine whether there is enough evidence for Murray to stand trial. The Houston cardiologist has pleaded not guilty and his attorneys have said he did not give Jackson anything that should have killed him.

Walgren said he will rely on Murray's statements to police, as well as text messages, phone records and expert testimony to show the doctor should stand trial.

He faulted the doctor in opening statements for performing CPR on Jackson with one hand on his bed, rather than a hard surface as is generally required.

Walgren also plans to call several experts whom he said would testify, "there are a number of actions displayed by Dr. Murray that show an extreme deviation from the standard of care."

The prosecutor also said he would call a bodyguard who would testify that Murray ordered him to collect items from Jackson's bedroom.

A handful of Jackson fans staked out the courthouse, displaying signs seeking justice. A few dozen more waited in line for a lottery in which five courtroom seats were awarded to the public.

Outside the courthouse, Sean Kang of New York City wore a replica of a Jackson performance jacket and a sequined glove to show his support for his fallen idol.

Kang, 35, shivered slightly while waiting with other fans for Murray's arrival.

"My heart is very cold to Dr. Conrad Murray," he said.