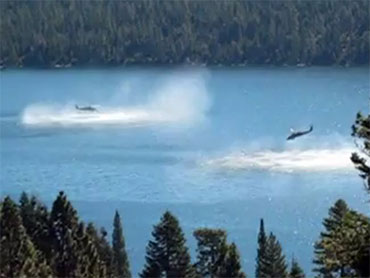 Military officials say an investigation is under way after two U.S. Navy helicopters dipped temporarily into the waters of Lake Tahoe, before righting themselves and landing at a nearby airport.

Kakiel said two pilots were returning from a cross-country tour when they attempted a "hover" maneuver with MH-60 Romeo helicopters a few feet above the water in Emerald Bay.

The aircraft had insufficient power to sustain the hover and slowly descended into the water, he said. Both were able to regain altitude and land.

The helicopters suffered some damage, but no one was injured in the incident and no fuel leaked into the lake, Kakiel said.

According to the San Diego Union-Tribune, the Navy wouldn't identify the pilots or say whether the helicopters were supposed to be hovering over Lake Tahoe. The Navy did, however, say the entire Sept. 13 flight is under investigation.

Kakiel said the pilots are grounded until the Navy wraps up an aviation mishap board investigation. They could face administrative action and could lose their flying qualifications, the Union-Tribune reported.

The helicopters - each worth $33 million, according to a Navy website - were repaired at the Lake Tahoe airport and returned to San Diego on Sept. 16. Kakiel said the Navy has classified the incident as a "Class C Mishap," meaning the damages were between $50,000 and $500,000.

Retired Navy jet pilot Steve Diamond told the Union-Tribune he thinks the helicopter crew may have had a legitimate reason to be hovering over Lake Tahoe. Someone out hot-dogging probably wouldn't do it in view of another aircrew, or over a popular tourist destination, he said.

"It's possible they were troubleshooting a problem," said Diamond, who retired in 2002. "It's easy to make a snap judgment, but there are other possibilities."

The MH-60 Romeo is the Navy's newest helicopter and is considered state-of-the-art. Its usual missions take it over the open ocean for anti-ship and anti-submarine warfare.