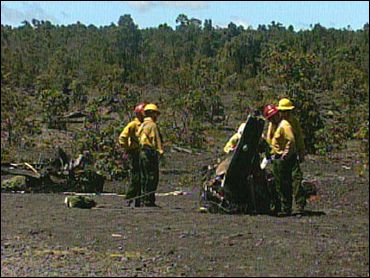 A sightseeing helicopter flying over an active lava flow from Kilauea Volcano crashed into rugged terrain, killing the pilot and all three passengers.

The pilot of the Hughes 500 reported engine problems before the helicopter fell straight down Sunday and "pancaked" into an old lava flow, said Tweet Coleman, the Federal Aviation Administration's Pacific representative.

Federal transportation safety investigators are at the crash site working against the clock, with lava apparently headed in their direction.

A geologist was called to the site to determine how quickly the lava will reach the area, said Jim Gale, a ranger at Hawaii Volcanoes National Park.

The helicopter owned by Tropical Helicopters was on a tour of the Kilauea eruption when it crashed about two miles from Chain of Craters Road, at the 600-foot level on a cliff known as Pulama Pali, Gale said. It wasn't immediately known how close the crash site was to active lava flows.

The bodies of the victims were recovered Sunday as park rescue personnel conducted an investigation at the crash scene, Gale said. Their names were being withheld pending notification of family members. Coleman said all three passengers were tourists from York, Pa.

A park firefighting helicopter working in the area confirmed the crash a short time later, and dropped buckets of water on the crash site fire, he said.