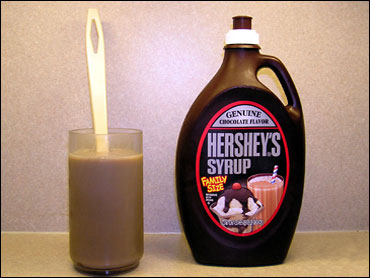 During a 2004 Summer Olympics awash in controversies over steroids and supplements, one sportswriter wryly noticed that top American swimmer Michael Phelps was playing it safe -- he preferred to drink Carnation Instant Breakfast between races.

Now it appears that the six-time gold medalist may have been onto something. A new study shows that plain old chocolate milk may be as good -- or better -- than sports drinks like Gatorade at helping athletes recover from strenuous exercise.

The study, published in the International Journal of Sport Nutrition and Exercise Metabolism, was small in scale; it was partially funded by the dairy industry. But dietitians say the study should help to counter the notion that high-tech, expensive supplements are better than whole foods when it comes to athletic performance. They also note that milk contains key nutrients, such as calcium and vitamin D, in quantities that sports drinks can't match.

"[Milk] is a sports drink 'plus,'" Keith Ayoob, EdD, a registered dietitian and associate professor of pediatrics at the Albert Einstein College of Medicine, tells WebMD. "It will supply you with things you need whether or not you're working out."

The study builds on findings that intense endurance exercise reduces the muscles' supply of stored glucose, or glycogen, a key source of fuel for exercise. To maximize glycogen replacement, the American College of Sports Medicine and the American Dietetic Association recommend taking in a serving of carbohydrates within 30 minutes after a long and vigorous workout.

Common sports drinks such as Gatorade supply those carbs, as well as fluids and electrolytes lost through sweat. However, more recent research suggests that adding protein to the mix may further hasten recovery. Hence the new wave of drinks such as Endurox R4 that include protein as well as higher doses of carbs.

But the most puzzling result of the study, experts say, was why Endurox -- which has the same carb-to-protein ratio as the chocolate milk -- fared so poorly. Researcher Jeanne D. Johnston, MA, tells WebMD it may have to do with the different composition of the sugars in the milk. Another theory is that the sugars in the milk may be better absorbed in the gut than those in the Endurox.

Edward F. Coyle, PhD, a researcher on exercise and hydration at the University of Texas, tells WebMD the trial would have been stronger if the researchers had also tested the effect of flavored water or another dummy (placebo) drink.

The study was partly funded by the Dairy and Nutrition Council, an industry group. Coyle says that the study's reliance on industry funding is not unusual in the world of sports research, as federal funding for such research is hard to come by.

While rapid nutrient replacement may not be important for casual exercisers, it can make a big difference in performance for competitive athletes who work out vigorously once or twice a day, says Roberta Anding, a sports dietitian and spokeswoman for the American Dietetic Association.

Anding has long recommended chocolate milk for young athletes who come to her practice at Texas Children's Hospital in Houston. For children and teenagers from lower-income families, it doesn't make sense to spend serious money on sports drinks when they can get milk as part of a subsidized lunch program, she tells WebMD. The only advantage of sports drinks, she notes, is that they never spoil.

Ayoob estimates that more than two-thirds of teenagers should be drinking more milk anyway because they don't get enough calcium in their diets. He also recommends milk for its vitamin D and potassium content. "For me, this is a no-brainer," he says.