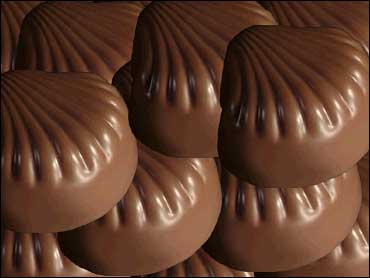 Legend has it that chocolate, eaten in copious amounts after a break-up, can mend a broken heart.

But can that same delicacy actually prevent the breakage in the first place, at least physiologically speaking?

Two research letters in the Aug. 27 issue of the Journal of the American Medical Association found dark chocolate and drinkable cocoa had beneficial effects on certain measures of heart function. Both were small studies, however, and experts warn it's not yet time to substitute Nestle's dark for tried-and-true fruits and veggies.

"Letters to the editors are not the place to change nutrition policy," says Dr. Robert H. Eckel, chairman of the American Heart Association's Council on Nutrition, Physical Activity and Metabolism. "Not only is chocolate high in calories, but one-third of it is fat that can be converted to a monounsaturated fatty acid. This doesn't give us enough information to just open the green light to chocolate consumption."

The first study tried to ascertain the beneficial properties of polyphenols, compounds that are found in various plants including cocoa plants.

Thirteen people aged 55 to 64, who had recently diagnosed and untreated hypertension, were randomly assigned to receive either dark chocolate bars with 500 milligrams of polyphenols and 480 calories or white chocolate, also with 480 calories but no polyphenols. After 14 days, the participants abstained from chocolate for seven days, then switched groups.

Individuals who had been taking the polyphenol-rich chocolate saw a reduction in their blood pressure within 10 days. Those in the white chocolate group had no reduction.

"The idea that there could be differences between dark and white chocolate that could be related to blood pressure needs to be fleshed out," Eckel says.

There's also the issue of quantity. "The way we process chocolate tends to reduce the concentration of healthful compounds," says Samantha Heller, senior clinical nutritionist at the Joan and Joel Smilow Center for Cardiac Rehabilitation and Prevention at New York University Medical Center.

At the same time, Heller points out, "Polyphenols are found in fruits and vegetables with the same if not more health-promoting qualities."

The second study involved 26 participants who were asked to drink cocoa high in flavonoids called flavan-3-ols. In this study, just one drink had a beneficial effect on endothelial function. The endothelium is the inner lining of the blood vessels.

Again, though, the study was a small one and also had some methodological problems. "Seventy-seven percent of these people smoked and are probably damaging their endothelium left and right," Eckel says.

"Chocolate is still chocolate in terms of fat composition," Eckel adds. "Even though there could be some properties of cocoa that are beneficial, we have lots of downsides of caloric consumption that may cut across the grain of benefit."

Look for fruits and vegetables for their natural cardioprotective qualities, — but don't despair. "If you want a chocolate treat once in a while, the bitterer the better and don't feel badly about it," Heller says.