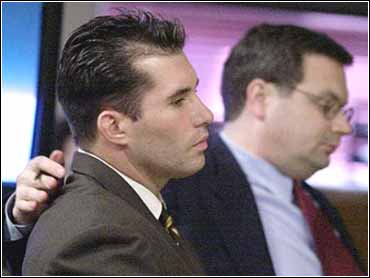 Former Green Bay Packers star Mark Chmura used to make suggestive comments to the baby sitter he is accused of sexually assaulting, a friend of the teen-ager testified Friday.

"She told me that when she had baby-sat for him he had made comments about her being 'jail bait,' " Margaret Polack testified on the second day of Chmura's trial.

Chmura's accuser said the former NFL player led her into a bathroom at a post-prom party at the home of his friend, Robert Gessert, and had sex with her without her consent.

Chmura, 31, is charged with third-degree sexual assault and child enticement. He could face up to 40 years in prison and $20,000 in fines if convicted of both felonies. Gessert goes on trial in March on charges he fondled an 18-year-old woman in a hot tub at the party.

Polack, who attended the party, testified that Chmura's and Gessert's accusers "were crying and very upset and said they had to leave," near party's end.

On Thursday, when Gessert's accuser took the stand for nearly four hours, a defense lawyer sharply challenged her account of Chmura's alleged assault on her friend.

"Is the story still evolving? Are you still remembering things?" attorney Gerald Boyle asked at one point. The witness replied that she told him everything she could remember.

She fought back tears at times as she described how she ran upstairs after Gessert allegedly fondled her. Another partygoer, Mike Kleber, came into the room and told her that her friend was in the bathroom with Chmura, she said.

She said she ran downstairs and pounded on the door, screaming the girl's name. When the door opened, her friend stood there with her hair mussed and tears in her eyes, she said. Chmura was less than a foot behind her, and both were fully clothed, she said.

Under cross-examination, Boyle asked her to grade her drunkenness on a scale of one to 10. She said she, Chmura and Gessert all rated an eight. She said Kleber was a 10 and could barely talk. At one point a glass of alcohol broke on a pingpong table and he licked it up amid shards of glass, she said.

Boyle said in his opening statement Thursday that Chmura's accuser told friends she hated the former football player and that she had told differing stories about what occurred.

In his opening, District Attorney Paul Bucher said jurors would hear how Chmura beckoned the girl, pulled her into the bathroom and had her on the ground in seconds.

Chmura joined the Packers in 1992 out of Boston College. He was a three-time Pro Bowl selection and appeared in two Super Bowls with Green Bay. He missed most of the 1999 season with a neck injury and was trying to come back when he was arrested.

The Packers cut him in June after hwas charged.