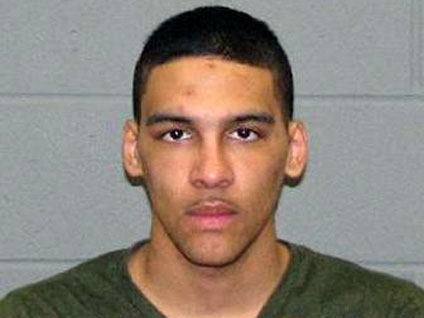 Francisco Cruz is expected to make his first court appearance Monday in Waterbury Superior Court in connection with the death of Chloe Ottman.

Police say that Cruz confessed Saturday to murdering Ottman after the two reportedly walked together to the dilapidated religious landmark, Holy Land USA, on Thursday evening. Police say the teens were friends for nearly two years.

According to Waterbury police Capt. Chris Corbett, Cruz was the last person seen with Ottman. He originally denied having any part in her disappearance, but once questioned by police, Cruz led authorities to her body and admitted to sexually assaulting and strangling her, said Corbett.

Corbett said Ottman was murdered at the bottom of a cross where she was raped and strangled before Cruz reportedly threw her body in the woods, reported the Republican American.

Ottman's neck was covered with stab wounds, said Corbett. An autopsy scheduled to be conducted Monday morning has yet to reveal the exact cause of Ottman's death.

Ottman was expected to begin her junior year at Crosby High School this fall. Family and loved ones remembered the young teen at a vigil in Waterbury Sunday evening, according to CBS affiliate WFSB. "She's just one of the closes friends I've ever had," said Ottman's friend, Alasia Costello. "It's clearly amazing, all these people here for here."

Cruz faces capital felony murder, strangulation and sexual assault charges in the death of Chloe Ottman. If convicted, he may face the death penalty.