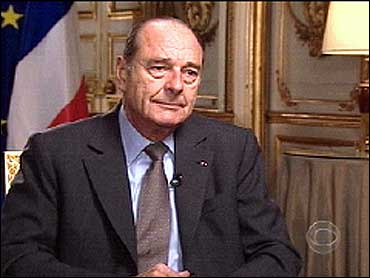 Weapons inspections should continue in Iraq until the inspectors reach "a dead end," French President Jacques Chirac insists in an interview on CBS News' 60 Minutes.

In an interview that aired March 16, Chirac told Christiane Amanpour why he is proposing an additional 30-day delay on any decision to use force against Iraq.

And, following the summit meeting Sunday with the prime ministers of England and Spain, President George Bush blasted the French president for promising to veto any war resolution at this time.

Amanpour spoke with the French president in Paris just before the Sunday summit started.

The French president continues to maintain that a further delay of 30 days would allow weapons inspectors to determine whether an impasse had been reached.

A transcript of Amanpour's interview with the French president follows. His responses have been translated into English.

AMANPOUR: Britain and the United States have accused France of poisoning the process by saying that you would use your veto under any circumstances. Even in Iraq, newspapers loyal to Saddam Hussein are hailing, are praising, the division in the world community, calling it a great victory for Saddam Hussein. Do you not think that your repeated vow to veto has emboldened Saddam Hussein?

PRESIDENT CHIRAC: France is not pacifist. We are not anti-American either. We are not just going to use our veto to nag and annoy the US. But we just feel that there is another option, another way, another more normal way, a less dramatic way than war, and that we have to go through that path. And we should pursue it until we've come [to] a dead end, but that isn't the case.

AMANPOUR: Mr. President, you know that since you have taken the position you have there has been a massive backlash in the United States at almost every level of society. From the leader of the House of Representatives, who is talking about initiating sanctions against France in some form or another, to restaurants in the Congress which have renamed their frites. Their French fries are now being called "freedom fries." People feel… they are asking, 'what happened to our friendship? Does France remember who liberated them? Why is France betraying us?'

PRESIDENT CHIRAC: Whenever there were difficult circumstances the French were side by side with the Americans. The French don't either forget what America and Americans did for us in both world wars. It is in our minds and also deep down in our hearts. I think that the relationship between the French and the Americans, the human relationship, is a relationship of friendship. Of love even, I would say. But if I see my friend or somebody I dearly love going down the wrong path, then I owe it to him to warn him be careful…

PRESIDENT CHIRAC: I want to tell them also that France and I have always been friends of the United States, and this will not change

AMANPOUR: The fact is, Mr. President, that in America many people think it's just because you are a friend, a pal of Saddam Hussein. That you have had long contacts with him, that you helped build the nuclear reactor there, that there are the oil deals. You invited Saddam Hussein to France. There is a famous picture of you toasting him. They think it is about a personal and a business relationship

AMANPOUR: There have also been persistent allegations that Saddam Hussein put money into one of your electoral campaigns. How do you respond to that?

PRESIDENT CHIRAC: (laughter) It's preposterous, really.. Anything can be said about anyone. As we say in French, 'The taller the tale, the more likely people will believe in it.'

AMANPOUR: The New York Times has reported that there is evidence that France is involved, French companies, in transferring materials for use in long-range missiles, Iraqi missiles. Are you aware of any French companies being involved in such an effort, and if so…

PRESIDENT CHIRAC: Because The New York Times is a serious newspaper, as soon as I read this I ordered an inquiry. I can now confirm officially after an inquiry by the French foreign ministry, France and French companies have never endorsed or even provided such material to Iraq. So I am clearly denying this allegation.

AMANPOUR: Can I ask you again about the nuclear reactor at Ossirac? You know, a lot of people called it "Os-Chirac", as you know. In retrospect, do you regret that it was destroyed, given that it could have been used to form nuclear weapons?

PRESIDENT CHIRAC: Well, this reactor was civilian reactor. But in those days, all of the major democracies, all of them, each and every one of them, had contacts and trade and exchanges with Iraq, including on weapons. Even weapons of mass destruction sometimes, including bacteriological, biological weapons

AMANPOUR: Do you believe that Saddam Hussein has weapons of mass destruction; for instance, chemical or biological weapons?

As for weapons of mass destruction, bacteriological, biological, chemical, we don't know. And that is precisely what the inspectors' mandate is all about. But rushing into war, rushing into battle today is clearly a disproportionate response.

AMANPOUR: Here, many commentators, many newspapers have been hailing you as a hero. They have even said your position should make you qualify for a Nobel Peace Prize. Of course, in America, in Britain, they call you an appeaser, that you are appeasing this terrible dictator who may have weapons of mass destruction.

PRESIDENT CHIRAC: I feel the same way about Saddam Hussein as George Bush or Tony Blair. There is a rather long list of countries where there are dictatorships, and if we were going to wage war to get rid of all of them without pursuing all other options, we are going to be very busy

CHRISTIANE AMANPOUR: You have said that inspections were working in great part because of the massive US and British force that is arrayed outside Saddam Hussein's doorstep. Wouldn't it be even more effective if France had sent troops also to double and triple the threat?

PRESIDENT CHIRAC: I have said that it is indeed thanks to the pressure of British and American troops that the Iraqi authorities and Saddam Hussein have changed their position and have agreed to cooperate with the inspectors..

So I would say that the Americans have already won, and they haven't fired a single bullet.

AMANPOUR: On the eve of what looks like war, what do you have to say to President Bush, who you call a friend?

PRESIDENT CHIRAC: I just want to tell him I don't share his views, that I don't approve of his initiative, and of course I hope that things run as smoothly as possible and there is a peaceful disarmament… But if we have to have a war let there be as few dramas and as little destruction as possible.

Yuval Harari warns humans will be "hacked" if AI is not globally regulated
Thanks for reading CBS NEWS.
Create your free account or log in
for more features.
View CBS News In
CBS News App Open
Chrome Safari Continue
Be the first to know
Get browser notifications for breaking news, live events, and exclusive reporting.