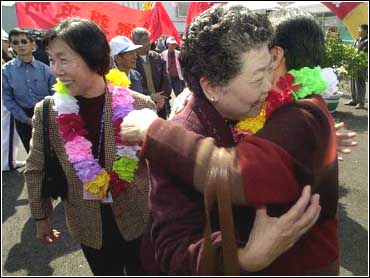 More than half a century of family division ended in hugs and tears of joy on Tuesday after the first mainland Chinese ship to sail legally to Taiwan since 1949 arrived at the heavily-fortified island of Kinmen, also known as Quemoy.

The vessel's arrival could signal that Beijing, despite early reluctance, is willing to go along with Taiwan's new policy of allowing limited trade and shipping links between its outlying islands and China.

If the new ties flourish, they could help ease decades of hostilities across the Taiwan Strait, one of the world's most dangerous flashpoints. The two sides split amid civil war in 1949, and a war between them could quickly involve the United States, Taiwan's closest friend.

China has made it clear that Taiwan is the core issue in China-U.S. relations – most recently when announcing on Tuesday that foreign policy tsar Qian Qichen will travel to the United States next month in the first visit by a senior Chinese official under the George W. Bush administration.

The China-registered Gulangyu, or Piano Island, docked to be welcomed by the sounds of gongs, drums and firecrackers, in another sign of rapprochement efforts between the long-term adversaries.

Aboard the passenger ferry were 80 elderly Kinmen natives stranded on the mainland since China's civil war split in 1949.

Among them was Li Mingfu, 80, a doctor of Chinese traditional medicine, who was reunited with his 89-year-old sister Xu Li Qin.

"I never thought I would see you again here," he said, tears streaming down his face as he embraced his sister who was too frail to walk.

"I don't want to talk about politics. I'm just happy to see my sister," he told reporters.

The streets of Kinmen, since 1949 a frontline fortress in Taiwan's Cold War with China, were festooned with red banners to welcome the 80 elderly visitors accompanied by 11 mainland officials and six reporters.

It took just 50 minutes for the vessel to cross the narrow Taiwan Strait from the port city of Xiamen.

Taiwan banned direct trade, travel and postal links with China in 1949 after Chiang Kai-shek's Nationalist troops were defeated by the Communists and fled into exile on the islands.

But the new government of President Chen Shui-bian has approved limited direct contacts between Taiwan's outlying islands and the Chinese province of Fujian.

Last month, a Taiwan ship made the first legal direct crossing in the pposite direction.

And then last week, Taipei gave a group of Taiwan businessmen the go-ahead to sail directly to Xiamen, easing curbs which restrict such voyages to residents of Kinmen and Matsu.

Taiwan residents have been allowed to travel to China to visit relatives through a third country since 1987, and most of the 80 Kinmen natives have hosted family members from Taiwan since that time.

But Li had not seen his sister in more than 60 years since he was sent away to study.

Wang Jiaxiang, a 78-year-old retired banker, seemed surprised to see the changes on Kinmen that was an impoverished rural backwater when he left at age nine.

"Things are a lot different from when I left," he said.

Zhang Yuanqi, a 72-year-old woman stranded in China while visiting an aunt when she was 18, could hardly hide her excitement.

"I am very happy to be back," said the mother of four.

"I was so excited I could not sleep for several nights."

The visitors will pay respects at the graves of their ancestors before returning home on Friday.

Kinmen officials estimate there are 400 to 500 island natives living in Fujian.

The separation has been particularly cruel because for more than half a century the families have been so close -- the Chinese coast is within sight of Kinmen.

Beijing is pushing for full trade, travel and postal links with Taiwan and only grudgingly went along with Taiwan's plans for limited direct contacts.

China's Communist authorities still regard Taiwan as a renegade province to be reunited with the mainland by force if necessary.

The limited links are largely symbolic as they merely decriminalize what Taipei considers smuggling -- small-scale trade encouraged by Beijing since the early 1990s.

But in a further sign of warming ties, the first Chinese reporters to be posted to Taiwan are due on Thursday.

And Beijing has loaned Taiwan 17 of its world famous terracotta warriors that guard the tomb of China's first emperor.