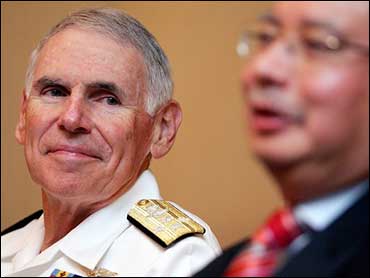 A Chinese Foreign Ministry spokeswoman, however, said she had not heard of such an incident.

The aircraft carrier and its supporting ships were conducting exercises in an unidentified location when the encounter occurred, Adm. William Fallon, the commander of U.S. Pacific Command, told reporters.

The carrier group was not engaged in anti-submarine exercises, but if it had, "and if this Chinese sub came in the middle of this, then it could have escalated into something that could have been very unforeseen," he said.

Fallon, who is in Kuala Lumpur for a 23-nation Chief of Defense Forces meeting, did not give any other details. He was commenting on a report on The Washington Times' Web site that said a Chinese submarine "stalked" the Kitty Hawk and surfaced within torpedo firing range.

The newspaper said the carrier group was operating close to Okinawa at the time of the incident.

"It illustrates the primary reason why we are trying to push, to have better military-to-military relationships" with China, Fallon said.

"Because the fact is that you have military units that operate in close proximity to one another," he said, warning of "the potential for events that would not be what we'd like to see."

In Beijing, Foreign Ministry spokeswoman Jiang Yu could not say if the incident had indeed occurred.

"I have not heard of such a report," she said at a regular news briefing Tuesday. "China has always had a defensive national defense policy. We are an adamant force in maintaining peace and stability in the Asia-Pacific region as well as the world at large," she said.

Fallon's disclosure came at the same time the commander of the U.S. Pacific fleet, Adm. Gary Roughead, was in China overseeing the first ever joint exercise, scheduled to start Nov. 19, between the U.S. and Chinese navies.

"It's a modest search-and-rescue exercise, but it's a start ... so that we can move ahead from what I would characterize as kind of Cold War thinking," Fallon said.

Fallon has visited China three times since taking office about 18 months ago to boost contacts and reduce the potential for miscalculations.

Visits between the Chinese and American militaries dropped off after the collision of a U.S. spy plane and a Chinese fighter jet off China's coast in 2001 but relations have improved recently as Washington cautiously seeks to increase exchanges.

China declined an invitation to attend the Kuala Lumpur meeting, but Fallon said he was hopeful they would in the future.