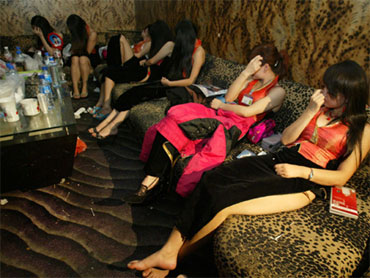 Chinese officials are being told to dump their mistresses, avoid hostess bars, and shun extravagances as part of the Communist party's efforts to clamp down on the corruption that is threatening its rule and sullying its reputation.

The language of the new morality push, one of countless such campaigns informally under way, is surprisingly bold, often cutting through the bureaucratese to make a clear link between moral lassitude and corruption. One statistic trotted out at a recent speech to bureaucrats: 95 percent of officials investigated for corruption were found to be keeping mistresses.

"It's just not possible to keep a mistress on your salary because maintaining this sort of extravagant lifestyle requires a large amount of cash money," Qi Peiwen, a party discipline enforcer, told officials in southern China.

"So what do you do if you don't have the money? Naturally, you'll use the power at your disposal to go find some," Qi said, according to a transcript carried by state media.

The message was reinforced in a series of speeches at party academies last month by Li Yuanchao. He runs the organization department that controls senior appointments.

Morality drives date back long before the Communist Party seized power in 1949, but the current one seems to stem more from a recognition that rampant corruption threatens to undermine the party's authority and permanently warp the value system of this rapidly developing nation of 1.3 billion people.

Meanwhile, a campaign against pornography, lewd content and advertising for sexual services has bolstered efforts to control potentially subversive content on the Internet.

Without fixed definitions of what constitutes indecent material, the drive allows censors virtually unfettered authority to block material, including scads of blogs and personal networking sites such as Facebook, YouTube, Twitter and tumblr.

Not everyone is so willing to comply, however. This year the government has had to drop a heavy-handed attempt to increase Internet censorship by ordering pornography filters to be installed on all computers. It provoked a litany of complaints including that it denied access to much material that could not reasonably be considered offensive.

That climbdown is part of a wider trend in Chinese society - the gradual decline in the party's ability to insert itself into citizens' personal affairs.

Although it retains absolute political control, the 73 million-member party no longer wields total authority over access to jobs, housing and travel, and no longer requires government employees to seek their bosses' permission to marry.

June Teufel Dreyer, a China expert at the University of Miami, thinks the morality drive might stem from "the idea that pleasure-loving people don't work as hard as they should."

Chinese have toiled for 30 years to build their country's economic might, and "Doubtless the leadership has noticed that in other societies, the prosperity-creating generation is likely to be succeeded by a frivolous generation," Dreyer said.

In one prominent example, Chen Liangyu, a Politburo member and former Shanghai party boss became the most powerful official to fall in recent years. He was accused of being a greedy lothario who indulged his sexual urges with multiple girlfriends. The focus on Chen's alleged indecency was seen as an attempt to weaken support for him among other officials whose careers he had nurtured.

During the morality campaign, party officials could receive demerits on their character assessments if found patronizing hostess bars, where young women accompany men in drinking, singing, and often much more, said Li, the organization department chief.

The campaign coincides with the sentencing of 16 high-ranking officials this year, four times more than last year.

In the end, however, the campaign's effectiveness may be fleeting, largely because it could expose much more corruption than the party had bargained for.

Dreyer said officials and others are likely to initially offer minimal compliance and that the campaign will then lose steam.

"Then, gradually, the old patterns will reassert themselves," she said.
By Associated Press Writer Christopher Bodeen