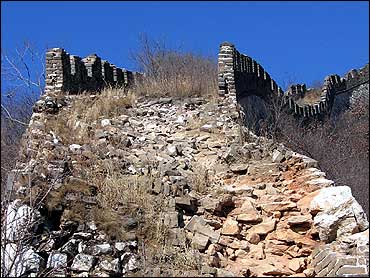 A Chinese gold mining company is being investigated for causing serious damage to one of the oldest sections of the Great Wall of China.

Hohhot Kekao Mining Co. is suspected of destroying about 330 feet of the wall while prospecting in Inner Mongolia to the northwest of Beijing, the head of the regional cultural relics bureau, Wang Dafang, told The Associated Press on Wednesday.

The bureau originally discovered the damage in September and ordered the company to stop, but inspectors returned later and found work had resumed, Wang said.

Investigators are now collecting evidence and plan to bring charges, Wang said. If found guilty, company officials could face up to 10 years in prison depending on the degree of damage, he said.

The damaged section of the wall dates from the Qin Dynasty (221-207 B.C.) and is far lower and less grand than the better-known and heavily visited portions on the outskirts of Beijing.

"Some people think the only part of the Great Wall that needs to be protected is in Beijing," Wang said. "Although the Inner Mongolia wall is more modest, it carries the same significance."

Built to keep out raids by northern tribes and extended by successive dynasties over 2,000 years, the Great Wall now faces threats from mining, road building, commercial development and villagers who plunder it for building materials.

Laws have been passed to prevent damage to the wall, a UNESCO World Heritage Site that runs for roughly 4,000 miles across northern China from the Bohai Gulf to the Gobi Desert.

Last year, five miners were jailed for up to three years for damaging the Inner Mongolia wall while using heavy machinery, the only people to be jailed under the preservation laws to date.

President Barack Obama is scheduled to tour a section of the 500-year-old Ming dynasty wall near Beijing during a state visit next week.