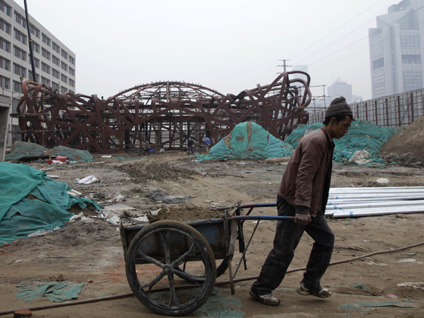 Since the Communists came to power, November 15 has been circled in red on many Beijing calendars. It's not Mao Zedong's birthday. November 15 is the day when city officials dutifully flick the switch to turn on the capital's centrally-controlled heating system, supplying warmth to most of Beijing's 22 million residents.

In one of the last vestiges of collective living, Beijing's coal plants pump heat to city apartments on a strict schedule, from November 15 to March 15, every year. Since the 1950s, the schedule has rarely changed, even if temperatures plummet before the appointed day.

After enduring record heat-waves this summer, with the mercury soaring to its highest mark in 60 years, and thick pollution in the fall (which the government blamed on "fog"), Beijingers are now suffering through the early onset of bitter cold. China's state-run media reported October 18 as the city's coldest autumn day since 1986, with temperatures peaking at 48 degrees and then dropping to 44.

Many residents of the capital city are counting down the days to November 15 hunched over their computer keyboards, commiserating about the frigid weather and lack of government-provided relief.

"I can't function in Beijing's October without a hot-water bottle and an electric blanket," complains one Chinese internet user. Others employ greater creativity to stay toasty.

"I highly recommend doing slow-motion exercises while surfing the internet in order to stay warm," suggests one energetic web chatter. Most local apartments don't have thermostats, so residents have no idea whether it's warmer inside than outside. Many use electric space heaters and turn their air conditioners to the "warm" setting to thaw their icy homes.

There is one silver -- or green -- lining to weeks of goose bumps. Beijing's power plants burn through 41,000 tons of coal every day to keep the city's residents warm in winter. That energy is saved each day the government keeps the radiators turned off. Beijing officials grumble that last year, the heating was turned on a few days early but then the weather warmed up again, wasting precious resources.

Until the grim mid-November countdown is over, Beijingers have little to do but sit, shiver and, ironically, pray for extremely cold weather. Local officials have promised to turn on the heat if the mercury dips below 40 degrees for five days in a row, or if the city is blanketed in snow.

And those wishes may be answered soon; a cold front is expected to hit Beijing on October 23. Miserable meteorologists warn, however, the capital won't likely be blanketed in snowflakes... but sheets of cold rain instead. That probably won't get the heat turned on.

This story was filed by CBS News correspondent Celia Hatton in Beijing.