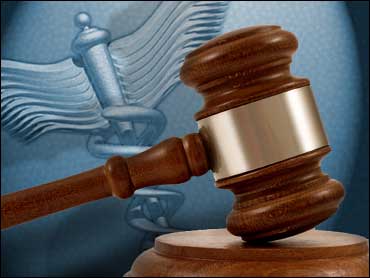 A New Orleans federal judge on Thursday awarded seven Virginia families $2.6 million in damages for homes ruined by sulfur-emitting drywall made in China, a decision that could affect how lawsuits by thousands of other homeowners are settled.

It remains to be seen how the plaintiffs can collect from Chinese companies that do not have to respond to U.S courts, although some have talked about getting orders to seize U.S.-bound ships and cargoes from the drywall companies.

Thousands of homeowners, mostly in Florida, Virginia, Mississippi, Alabama and Louisiana, have reported problems with the drywall, which was imported in large quantities during the housing boom and after a string of Gulf Coast hurricanes.

The CBS News investigative unit first reported last year about the thousands of Americans forced out of their homes by defective, rotting drywall. But the investigative unit also found that there maybe be problems with American-made drywall.

The drywall has been linked to corrosion of wiring, air conditioning units, computers, doorknobs and jewelry, along with possible health effects.

U.S. District Judge Eldon Fallon ruled Thursday that the drywall needs to be removed and the plaintiffs' homes need to gutted because of the ruinous effects of corrosion. He said all electrical wiring, the heating and air conditioning system, appliances, carpet, cabinetry, trim work and flooring damaged by corrosion would have to be removed.

Fallon's decision was the first in a series of federal lawsuits brought against manufacturers, distributors, suppliers and homebuilders by thousands of homeowners. The claims have been consolidated under Fallon. Separately, thousands of plaintiffs are pursuing claims in state courts.

Thursday's ruling could set the standard for what needs to be done to make a tainted home fit for living in. Fallon's guidelines went further than those put out by the Consumer Protection Safety Commission earlier this month. The CPSC called for removing the tainted drywall, electrical wiring, fire alarm systems and gas pipes.

"We got everything we asked for," said Richard Serpe, an attorney for the Virginia plaintiffs. "This becomes a roadmap for any court that is going to consider how the litigation should go from here."

Fallon's ruling covered only property damage and did not look at possible health effects. The first cases with medical claims won't be considered by the court until late 2010 or early 2011.

It was far from certain who would pay for the damages. Civil judgments in U.S. courts aren't enforced in China. Plaintiffs are suing American drywall suppliers, distributors and homebuilders, too.

Phillip A. Wittmann, a New Orleans lawyer representing homebuilders and drywall installers, said homebuilders have been proactive and gutted tainted homes they built.

"The homebuilders are really the only class of defendants doing anything for the homeowners," Wittman said.

In this case, the plaintiffs sued Chinese drywall manufacturer Taishan Gypsum Co., which hasn't responded to lawsuits and did not have a lawyer representing it at the February trial.

Plaintiffs lawyers have said they would try to seize the company's U.S.-bound vessels and shipments if the company continues to ignore the litigation.

So far, only one Chinese manufacturer - Knauf Plasterboard Tianjin Co. - has responded to U.S. suits. A separate trial was held last month against Knauf. Fallon has not ruled in that case. Also, homebuilders are suing Knauf Plasterboard and Knauf Gips KG, a German company, for damages, Wittman said.

The Taishan drywall was not tested under American engineering standards and Venture Supply Inc., the Norfolk, Va.-based buyer, "relied on a representation that Chinese testing was equivalent to the U.S. testing standards," the ruling said.

Taishan and the owners of Venture Supply Inc. could not be reached for comment. A telephone number listed on Venture's Web site was disconnected.

"The sulfur gases released by Chinese drywall cause offending odors in homes, making them hard if not impossible to live in," Fallon said.

During the February trial, the plaintiffs gave emotional testimony about how their lives had been damaged because of the defective drywall that gives off a rotten-egg smell.

William Morgan and his wife, Deborah, moved to Williamsburg, Va., after he retired from the Norfolk police department. They quickly realized something was wrong with their "dream house." Fixtures and mirrors turned black. Their lights malfunctioned. Their smoke detector system and water heater failed.

The problems drove them from their house into a rental home, leaving them in a financial mess that forced the couple to file for bankruptcy protection last year. Fallon awarded the Morgan family $481,613.

"I'm tickled to death with the decision, but as far as the mechanics of doing what needs to be done, I don't know," Morgan said by telephone Thursday.

Jerry Baldwin, 59, of Williamsburg, said he and his wife, Inez, could not afford to move out of the home they bought in 2006. The couple blamed Chinese drywall for ruining appliances, electronics and the home's air conditioning system.

Baldwin said the problem has cost him his financial security and left him worried for his family's health. Fallon awarded the Baldwins $441,699.