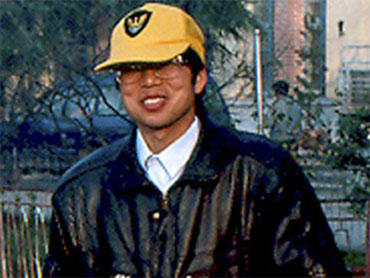 An American geologist detained and tortured by China's state security agents over an oil industry database was jailed for eight years Monday in a troubling example of China's rough justice system and the way the U.S. government handles cases against its citizens.

Jon Huntsman, U.S. ambassador to China, was inside the court. He did not speak after the verdict, but the U.S. Embassy in Beijing released a statement saying it was "dismayed" and urged China to grant Xue "humanitarian release and immediately deport him."

Xue was sentenced with three Chinese nationals, who were charged with illegally providing intelligence abroad. Li Yongbo was sentenced to 6 years in jail and fined 200,000 yuan, and Chen Mengjin and Li Dongxu were given sentences of two and a half years and fined $7,500 each.

For Xue, the verdict comes more than six months since the last court hearing and two and a half years after he was detained - a protracted prosecution and pretrial detention that Chinese officials never explained.

Born in China and trained at the University of Chicago, Xue ran afoul of the authorities for arranging the sale of a detailed commercial database on China's oil industry to IHS Energy, the energy consulting firm he worked for that is now known as IHS Inc. and based in Colorado.

The case has been seen as a troubling complex of the pitfalls of Chinese justice, especially for successful native Chinese who go abroad for education and work, acquire foreign citizenship and then return to China for work. Xue's case came to trial just as another China-born foreign national, Australian Stern Hu, was detained amid tense negotiations on iron ore sales between his employer, global mining colossus Rio Tinto, and Chinese state companies.

Both Xue and Hu were charged on vague state secrets charges. But unlike Xue, Hu's arrest received immediate publicity from the Australian government and media. He is not known to have been mistreated and was brought to trial quickly, sentenced in March to 10 years for bribery and infringing trade secrets.

By contrast, Xue languished in detention. His disappearance in 2007 and arrest did not become public for two years until reported by The Associated Press last November. During the early weeks of his detention, state security agents tortured Xue, stubbing lit cigarettes into his arms and hitting him on the head with an ashtray.

Later allowed visits by U.S. consular officers, Xue told them he wanted his case made public. However, his wife, who lives in Texas, disagreed, believing that quiet lobbying might be more effective and fearing that the publicity would trouble their two children and possibly jeopardize her relatives still living in China. Amid their disagreement, the U.S. State Department pursued back-channel diplomacy.

Meanwhile, the case was batted between the court and prosecutors. All told, he appeared three times in court before Monday's hearing, the first in July a year ago and the last in December. The court then repeatedly postponed sentencing. Legal experts said the delays in issuing a verdict exceeded legal time limits; Xue's lawyer said a decision should have come in March at the latest.

The lapses illustrate a growing willingness by the authoritarian government to ignore laws to suit political interests.

"This is a very harsh sentence. It's a very sad day for justice in China," said American John Kamm, who regularly campaigns for the release of Chinese political prisoners.

"It's a huge disappointment and will send very real shivers up the spines of businesses that do business in China," he said.

"There's an increasing number of cases where there's no legal fig leaf," Jerome Cohen, a venerable China law expert at New York University who has advised Xue's wife, said in an interview before the verdict.

Aside from Xue, Cohen ticks off other instances of detentions without legal basis, among them Gao Zhisheng, a crusading rights lawyer disappeared by authorities repeatedly, and Zheng Enchong, a lawyer who spent three years in prison after revealing a corrupt land deal and is now in the fifth year of house arrest that has little legal basis.

"These are increasingly apparent, visible signs of lawlessness," said Cohen.

Chinese officials have wide authority to define state secrets, and the latitude makes it difficult for foreigners and Chinese alike to know when they are crossing the line.

Draft regulations released by the government in April defines the business secrets of major state-run companies as state secrets. In Xue's case, the database had been prepared by a Chinese company and contained detailed information on the state of the Chinese oil industry, which is predominantly state-controlled.

Chinese law enforcement never identified the prison where Xue was being held, neither to embassy officials in Beijing nor his lawyer, the only outsiders Xue was allowed to see. While the physical abuse of his early detention stopped, Xue was still subject to indignities: The U.S. Embassy said as of last week it had delivered 20-some books for Xue but prison authorities only allowed him a few.

Trying to get Xue's case unstuck and underscore U.S. government interest, Huntsman or the embassy's No. 2 have personally met with Xue every month since late last year on the single monthly meeting consular officials are allowed under a Chinese-U.S. agreement.

During last month's visit, Huntsman waited an hour for Xue at the No. 1 Intermediate People's Court, where the monthly meetings are held. The judge stopped by to apologize, saying Xue was delayed by traffic, but he refused to discuss the case, according to the U.S. Embassy. Xue eventually showed up, meeting with two consular officials who stayed after Huntsman left for another appointment, the embassy said.