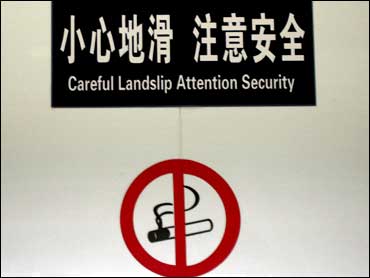 Along with spitting, run-down housing and bad manners, add unintelligible English to the list of things organizers of the 2008 Beijing Olympics want to ban.

Municipal officials promised Wednesday to crack down on awkward, Chinese-inflected English, known as "Chinglish," and asked the public to help police bad grammar and faulty syntax.

With 500,000 foreigners expected for the Olympics, taxi drivers who can't speak English — or signs that mangle the language — could be an embarrassment and distract from the $40 billion being poured into rebuilding the city for the Games.

Throughout the city, examples abound.

On a billboard this mysterious message: "Shangri-La is in you mind, but your buffalo is not."

In an elevator, parents are warned: "Please lead your child to tare the life."

Liu Yang, who heads the "Beijing Speaks Foreign Languages Program" for the city government, said 6,500 "standardized" English-language signs were put up last year on Beijing roads. But he acknowledged private businesses were not following the rules, which were handed to reporters — a stack of glossy documents weighing two pounds.

"We will pass the message on to authorities in the advertising sector," Liu said. "If English translation is needed, it must be subject to the standards set forth in the regulations."

Liu said a language hotline may be set up for the Games to encourage the public to report nonsense English. China's diplomatic missions abroad are assisting, Liu said, "and our people working in foreign companies are helping with correct usage."

"In the future when we set up new signs in public places in English, we hope all these standards will be followed to avoid more additional mistakes."

Liu said Beijing taxi drivers must pass an English test to keep their license. But he admitted most speak only Chinese, and many are skipping language classes.

"The taxi training courses are not working effectively, and there is a problem of taxi drivers missing classes," he said. "Taxi drivers need to get their licenses renewed every year, and an English test is now part of that that exam. But the exam is not so difficult."

Despite the problems, Liu said 33 percent of Beijing's 15 million residents speak some English, a claim that was challenged by a local reporter from China's state-run CCTV.

"I think 5 million is a big number," the reporter told Liu.

Liu stood by the figure, but acknowledged the vast majority of the English speakers fell into a category he labeled "low level."

"They can have very simply conversations, like: 'Who am I? Where am I going?'"