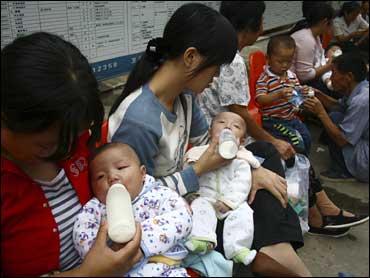 Local officials were calling and visiting at least a half-dozen families, urging them to drop their cases against the dairies and accept a government-sanctioned compensation plan giving 2,000 yuan ($290) to most victims, said Zhao Lianhai, the father of a child sickened by the milk.

At least one family has decided to back out of their lawsuit, said Zhao, who has rallied other families through a Web site he created.

"One parent told me, 'I'm more than 30 years old but I've never before seen the county and village officials. Everyone in the family is really scared,"' said Lu Jun, an AIDS activist who has been working with families of tainted milk victims in central China's Henan province.

Infant formula contaminated with the industrial chemical melamine was blamed for killing at least six babies and sickening nearly 300,000 across China in the scandal that began in September.

Unscrupulous middlemen are accused of adding melamine, which is high in nitrogen, to watered-down milk to fool quality tests for protein content. When ingested, melamine can cause kidney stones and kidney failure.

The scandal rocked the country, culminating in a law enacted in recent weeks that consolidates hundreds of disparate regulations covering the country's 500,000 food processing companies.

The accusations that local officials are trying to intimidate victim's families come despite this month's announcement by the executive vice president of China's highest court, Shen Deyong, that parents who rejected the government's compensation plan were welcome to file lawsuits against the dairies.

It was not clear why local officials would try to stop the families after Shen's announcement. But different levels of government in China often disagree on how to handle matters, and local officials may see lawsuits as a threat to their authority with the potential to upset stability in their community.

More than 600 families have demanded higher compensation than the government plan offers - one-time payouts using money from dairies named in the scandal. Families that take the money can't sue for more unless they can prove they were forced to agree to the compensation plan, lawyers have said.

"The last time they called me, I told them to call my lawyer," he said, planning to continue his legal fight against Sanlu, the dairy at the center of the crisis.

Lawyers representing the victims' families have also run into obstacles in recent days.

Li Jinglin, an attorney who was representing parents of children sickened by Shengyuan brand infant formula, said the Beijing city justice bureau called his law firm last Friday and told his superiors he should not be working on the case. Li said he withdrew from the case but hoped another lawyer could take his spot.

A coalition of lawyers working to sue the 22 dairies named in the scandal is focused primarily on getting at least one case involving the key dairy Sanlu to be accepted by a court in the northern city of Shijiazhuang.

"We just want the courts to accept at least one case as an example," lawyer Lin Zheng said.