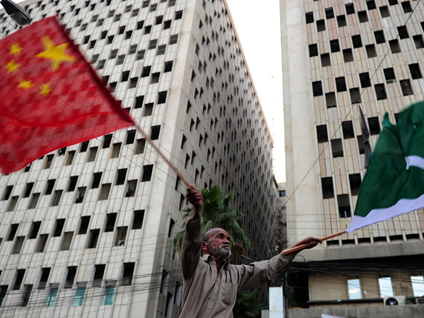 China's premier Wen Jiabao concluded a high profile visit to Pakistan on Sunday, promising to lay the foundation for a "deeper" relationship to a country which is central to U.S. efforts for stabilizing Afghanistan.

Wen sought to broaden a relationship which has traditionally been driven by Beijing's role as a key supplier of military hardware to Islamabad. Pakistan's government officials said that during Wen's visit, China signed business deals between the governments and private businesses of the two countries worth at least $29 billion, with a possibility of another $6 billion worth of contracts. These contracts were the largest ever signed during a visit by a foreign leader to Pakistan, underlining the growing importance of the country to China.

The Chinese premier also used a speech to a joint session of Pakistan's upper and lower houses of parliament to commend the country for its efforts against terrorism. It was an apparent effort to negate criticism from the western world, including the U.S., which has urged Islamabad to take further steps against Al-Qaeda and the Taliban.

"Pakistan has given great sacrifices and made great efforts in the fight against terrorism. It is a reality and the international community should respect Pakistan's efforts," Wen said.

While the U.S. has poured billions of dollars into Pakistan to assist in combating terrorist groups, Pakistan's military and civilian leaders remain committed to retaining a close alliance with China. "Let's stand together, with a new confidence, and begin a new era of progress and prosperity, by jointly confronting all challenges," Wen said in his speech on Sunday. To the applause of Pakistan's ruling and opposition politicians, the Chinese continued that "China and Pakistan are all-weather strategic partners and share the sorrows and joys of each other as close brothers."

A senior Pakistani official told CBS News that the deals signed during Wen's visit included contracts for the development of a road and train network linking the two countries, for mineral resources, for gas and oil fields and for facilities to produce electronics.

"China is beginning to launch an important new phase to help Pakistan transform itself economically," said the official, who spoke anonymously because he was not authorized to talk to journalists. "Unlike our western friends such as the U.S., China remains a true friend of Pakistan," he added.

Western diplomats in Islamabad who spoke to CBS News, also on condition of anonymity, said Pakistan's relations with China remain of concern to Washington in some areas, notably China's continued support for Pakistan's nuclear energy program and signs that China is stepping up its supply of conventional military hardware to Pakistan.

In the past decade, the two countries have jointly developed their first fighter plane for the Pakistan Air Force (PAF), known as the JF-17, or "Thunder." The PAF plans to buy up to 250 of the JF-17s, making it the largest-ever purchase by the PAF of a single type of aircraft. On the other hand, Pakistani leaders frequently speak of the trust factor in their country's relations with China, an oblique reference to the lack thereof in the country's ties with the U.S.

In the 1990s, the U.S. sanctioned Pakistan on suspicions that the country was preparing to produce nuclear weapons, which reversed the two sides' close cooperation when they confronted the occupation of Afghanistan by the former Soviet Union. While those sanctions were lifted after 9/11, which prompted a new partnership against terrorism, many Pakistanis remain skeptical of ties to the U.S. But a Pakistani foreign ministry official who spoke to CBS News said a growing economic relationship with China "will not come at the expense of our relations with the U.S. We want to establish and maintain a close partnership with the U.S. Our relations with China must never be seen as a replacement for our relations with the U.S."