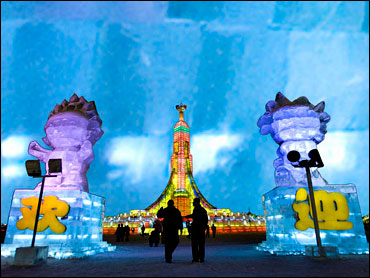 China said Thursday that "ulterior" motives were behind some criticism of its actions in Sudan, and the problems there should not be linked with this summer's Olympics in Beijing.

The comments from Foreign Ministry spokesman Liu Jianchao came a day after director Steven Spielberg's decision to drop out as an Olympics adviser on human rights grounds.

"It is understandable if some people do not understand the Chinese government policy on Darfur, but I am afraid that some people may have ulterior motives, and this we cannot accept," he told a regular news conference.

The Hollywood heavyweight had been brought in as an artistic adviser to the opening and closing ceremonies for the Beijing Games, but said he will not participate because he felt China wasn't doing enough to pressure Sudan into ending the humanitarian crisis in the Darfur region.

Chinese officials have consistently said they opposed any attempt to "politicize" the Olympics, which begin Aug. 8.

Liu said China was working with the United Nations to resolve the crisis and providing aid to Sudan. "China is also concerned about the humanitarian issues there, but we have been playing a positive and constructive role in promoting peace in Darfur."

Spielberg had indicated as early as last August that he might not take part in the ceremonies. The director said he had given up hope that China would take a more aggressive approach toward Sudan.

Fighting between government-backed militia and rebels in Darfur has killed more than 200,000 people and left an estimated 2.5 million displaced since 2003.

China is believed to have special influence with the Islamic regime because it buys two-thirds of the country's oil exports while selling it weapons and defending Khartoum in the U.N. Security Council.

"While China's representatives have conveyed to me that they are working to end the terrible tragedy in Darfur, the grim realities of the suffering continue unabated," Spielberg said in a statement.

Beijing has invested billions of dollars and its national prestige into what it hopes will be a glorious showcase of China's rapid development from impoverished agrarian nation to rising industrial power.

Yet it has been unable to turn back a rising tide of negative global opinion that joins concerns over the city's notorious pollution, snarled traffic and displacement of people for the construction of Olympic venues.

In recent days, the U.S. Congress and a coalition of Nobel Peace Prize winners, politicians and elite athletes have also lobbied Beijing over Darfur.

Actress Mia Farrow and other activists delivered an open letter addressed to Chinese President Hu Jintao at the Chinese Mission to the United Nations in New York on Tuesday.