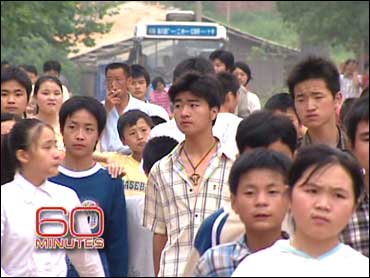 As China's President Hu Jintao makes his first official visit to the United States this week, his nation faces a demographic time bomb that could affect its stability.

With more than a billion people, China has too many men. According to the latest census, an average of 120 boys are born for every 100 girls, the greatest imbalance in the world.

As correspondent Lesley Stahl reports, the root of the problem is a traditional preference for sons. In China, as in other Asian countries, it is sons, not daughters, who usually take care of their parents in old age.

To deal with its population explosion, China imposed its strict and harshly enforced one-child policy in the 1980s, and that's when things started going out of whack, as couples, faced with having only one child, went to great lengths to ensure it was a boy. And 60 Minutes found they still do.

60 Minutes visited Linchuan, a small village in Jiangxi province in southern China, where the absence of girls is most acute.

When Stahl went to the No. 10 high school here, with its 7,000 students, the problem was clearly visible: there were far more boys than girls. For every 100 girls, there are 150 boys.

One class of high school juniors insisted that the lopsidedness didn't bother them, until Stahl pressed the case.

When asked whether they wished that more girls were in the school, both boys and girls answered with a resounding "yes."

The one-child policy is 25 years old, so the first generation is just now reaching marriage age, and for China that's a big problem because it is estimated that as many as 40 million of its young men could spend their lives as bachelors.

Some of these men have joined the country's floating population — 140 million migrants who move to the cities like Beijing in search of work. The 60 Minutes team came upon a group of men on a street corner, where they gather every day, illegally, hoping for day jobs.

Before the police came to shoo them and the TV crew away, Stahl asked them some questions with the help of an interpreter.

Asked if it is hard to meet women and get married, a man told Stahl through the interpreter: "He was saying you have to have a little wealth before you can get married. ... If you're poor, nobody will go with you."

The gender imbalance grew out of communist China's draconian social engineering policies, where a woman, after having one child, was forced to make a choice: sterilization or insertion of an IUD (intrauterine device).

To make sure the women kept their birth control devices in, the government — starting in 1982 — sent portable ultrasound machines all over the country. They are compact and lightweight and even some small villages got as many as two or three. But in a classic case of unintended consequences, pregnant women realized that the machines could also identify whether they were having a boy or a girl. And, as a result, by conservative estimates, more than 8 million girls were aborted in the first 20 years of the one-child policy.

The government has tried to discourage these abortions. Zhao Baige, vice minister of the Family Planning Commission, says it is now illegal to get an ultrasound in order to identify the sex of a baby.

"It is against the law," she explained.

A pregnant woman can still get an ultrasound, but only if it's medically necessary. To make sure the sex of the fetus is not revealed, two doctors are present and the exam is recorded on closed-circuit TV.

If a doctor told an expectant mother the sex of her baby, Zhao says the physician wouldn't be able to continue his or her job and would be fired.

But Chinese couples determined to have a boy can get around the restrictions on ultrasounds by going underground, in back alleys, where illegal storefronts have sprung up to meet the demand. Ultrasound machines are inexpensive in China; they cost about $360 and, as 60 Minutes saw, they are small enough to be hidden in a closet or even in the trunk of a car to do scans on the run. And that's made it difficult to crack down.

We showed the minister some Chinese newspaper photos of a van parked in a Beijing suburb doing ultrasounds in the back.

"Let me go to another point," the vice minister replied.

Her "other point" was that China's abortion rate is going down, but she didn't explain why abortions are still free and legal right up to the ninth month, even as the boy-girl imbalance grows.

"In world history, there has never been a bride shortage as large as is about to hit China," says political scientist Valerie Hudson of Brigham Young University, who co-authored a book on Asia's male surplus.

She and other scholars have compiled statistics going back centuries that show too many unmarried males in a society spells trouble.

"When there are more men than women, social instability and crime increases in society," Hudson explained. "Psychologists have talked about what they call the pacifying effect of marriage. Young men who have been pretty extreme criminals — upon marriage — and when the children begin to come, their criminal careers more or less end."

Asked if she is predicting a crime wave, Hudson said, "Yes. It's already happening."

And Zhao Baige admits that China has already begun to see social problems that stem directly from this gender imbalance.

In the early years of the one-child policy, the kidnapping of baby boys — those much desired sons — was a problem; lately, says minister Zhao, there has been a surge in trafficking of baby girls.

Many of the infant and young girls are being sold to become wives.

"The Chinese government confiscated a large plastic bag full of 28 girl babies, ranging in age from 2 to 5 months," said Hudson.

The baby girls, whose photos were posted on the Internet, were found stuffed together in plastic bags lashed onto the roof rack of a cross-country bus. Family members had sold them to traffickers for as little as $8 apiece.

"They were being sold to families in the countryside, who were worried about not finding wives for their sons," said Hudson. "So, they would buy them as infants and raise them in the family to become the bride of their son."

Older girls are also being kidnapped. Manyay and Mahray were taken to a faraway province and forced into marriage.

"The man was about 30 years old and a bit fat. He was a farmer and I didn't love him," one of the girls told Stahl.

The girls and thousands of other children were rescued by Chinese police, but tens of thousands are still missing. A couple from Yunnan Province were brave to talk to 60 Minutes, despite warnings by local police not to.

The Lu's daughter, Lei San-Lee, was 8 when she disappeared three years ago, apparently abducted while outside playing.

"Later, all her friends came back home, but she did not. And we went to her friends and asked why and they said they saw her leave with an older man," her father recalled.

Lei San-Lee was the couple's only child.

Some traffickers are caught, like 10 convicted in February for selling babies to orphanages where foreigners come to adopt them. Still, the government is worried.

"And political instability? Do people talk about that as a risk?" Stahl asked.

And so the government has launched a campaign to convince parents that having daughters is a good thing: propaganda street banners preach that preferring boys over girls is old thinking; while school fees for girls have been reduced, and laws changed so daughters can inherit land.

And state-run TV programs show the government handing out cash to parents with only daughters. A pilot project rewards these parents from age 60 on with what amounts to $150 a year, a doubling of their yearly income.

Zhao says the cash handouts are not payoffs to have girls. "Not paying, but we call it incentive," she said, laughing.

But she told Stahl that even with all the incentives and the government programs, the gender imbalance is actually getting worse.

A lot of Americans and Europeans come to China to adopt Chinese babies, almost all girls. Asked whether, given the shortage of girls, the program is a good thing to continue, Zhao says: "I think it good for children themselves. But it is not good for a country to solve your problem."

For example, a hotel in Jiangxi province is filled year-round with families who come here to adopt. 60 Minutes saw people from Spain, the Netherlands, all over Europe, in the hotel.

This is a great irony: while China tries to increase its population of girls, they allow — albeit for humanitarian reasons — 12,000 to leave a year; 8,000 to the U.S. alone.

"Will China's sex imbalance, gender imbalance, ever get fixed as long as that one-child policy is in effect?" Stahl asked Valerie Hudson.

"I don't think that the Chinese government can really tackle the roots of this entrenched-son preference until it raises that ceiling on the number of children," she replied.

The ceiling has been raised for some rural families who can now have two or three children, but the government is unlikely to undo the one-child policy that it credits with reducing the population by 300 million people. That, they say, is the key to their rapid modernization.

Zhao says it's one of the reasons for the country's economic success. "If, today, we add another 300 million, can you imagine? So we think it's a great achievement."

So, in other words, another population explosion is more dreaded than the girl shortage.

Back at the No. 10 high school in Linchuan, students overwhelmingly told Stahl they want to have one child when they get married. Young people see small families as a patriotic duty.

"She'd like to ask if it's true that in America most families have one child," a female student asked Stahl through an interpreter.

"No, most families have two or three," Stahl explained.

This girl said she thinks Americans are "conceited" to have more than one child. In China, she said, "We're supporting the Motherland by having less."
Produced by Karen Sughrue