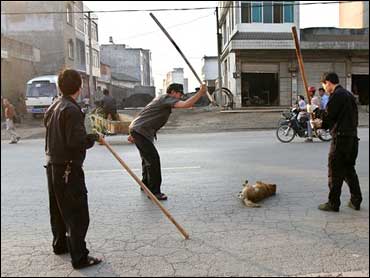 The slaughter of a reported 50,000 dogs in an anti-rabies crackdown in southwestern China sparked unusually pointed criticism in state media on Tuesday, along with calls for a boycott of Chinese products from activist group People For the Ethical Treatment of Animals.

Dogs being walked were taken from their owners and beaten to death on the spot, the Shanghai Daily newspaper reported. Led by the county police chief, other killing teams entered villages at night creating noise to get dogs barking, then homed in on their prey, the reports said.

Owners were offered 5 yuan (63 U.S. cents; 49 euro cents) per animal to kill their own dogs before the teams were sent in, they said.

The slaughter was ordered after about 360 of the county's 200,000 residents suffered dog bites this year, with three people reportedly dying of rabies, including a 4-year-old girl.

"With the aim to keep this horrible disease from people, we decided to kill the dogs," Li Haibo, a spokesman for the county government, was quoted as saying by the official Xinhua News Agency.

Calls to county government offices rang unanswered on Tuesday. Located in mountains about 1,240 miles southwest of Shanghai, Mouding is famed for its numerous Buddhist shrines.

The official newspaper Legal Daily blasted the killings as an "extraordinarily crude, cold-blooded and lazy way for the government to deal with epidemic disease."

"Wiping out the dogs shows these government officials didn't do their jobs right in protecting people from rabies in the first place," the newspaper, published by the central government's Politics and Law Committee, said in an editorial in its online edition.

In an editorial, Xinhua said the killings wouldn't have been necessary if the local government had been more attentive, but called the slaughter "the only way out of a bad situation."

"If they'd discovered this earlier, they could have vaccinated the dogs and ... controlled the outbreak," the editorial said.

In a statement to media, PETA President Ingrid Newkirk said the group had canceled all orders of merchandise it sold that was made in China.

"We are urging everyone to actively boycott — not a word we use lightly — anything from China given the bludgeoning killing of thousands of dogs" and examples of cruelty toward animals, Newkirk said.

Will Wright, at PETA's European office in London, said the orders were worth about $300,000.

"We believe other groups will join us in expressing outrage over the blatant cruelty to animals the world is witnessing," Wright said.

Unlike in the West, where dogs have long been cherished as companions or helpmates, dogs have rarely had an easy time in China. Dog meat is eaten throughout the country, revered as a tonic in winter and a restorer of virility in men.

Following the communist seizure of power in 1949, dog ownership was condemned as a bourgeois affection and canines were hunted as pests. Attitudes have softened in recent years, although urban Chinese are still subject to strict rules on the size of pets they can keep and must pay steep registration fees.

Increased rates of dog ownership have been tied to a major rise in the number of rabies cases in recent years, with 2,651 reported deaths from the disease in 2004, the last year for which data was available, according to the Chinese Center for Disease Control and Prevention.

About 70 percent of rural households keep dogs, the center said, although rates of rabies vaccinations remain extremely low at only about 3 percent.

"This has not been pursued adequately to date in China, with most control efforts consisting of purely reactive dog culls," she said.