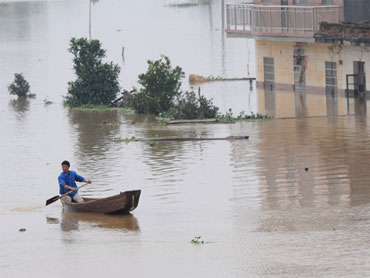 A landslide caused by heavy rains trapped at least 107 people Monday in southwestern China and there was little hope for their survival, a local official said. Rescue efforts were hindered by rain that threatened to wash more mud down hill slopes.

Many homes were buried when the landslide struck the village of Dazhai in Guizhou province on Monday afternoon after days of rain, a resident helping in the rescue effort, Huang Pangzun, told The Associated Press by phone.

The number of casualties was not immediately known, said an official in Guizhou province who would give only his surname, Xue. Another official, interviewed by state broadcaster CCTV, said nearly half a hill had collapsed, engulfing a wide area in soil.

CCTV showed still images of rescuers in orange overalls heading to the site on foot along a winding mountain road and later bent over a large mound of earth, tugging at large concrete slabs buried in it.

Large areas of southern China have been hit by flooding in the last week, with at least 239 people killed and another 109 missing not including those from Monday's landslide. More than 3 million people have fled their homes over the past two weeks, according to the Ministry of Civil Affairs.

On Sunday, floodwaters began receding in the hard-hit south and workers finished repairing a dike breach that forced the evacuation of 100,000 people.

But torrential rains have continued in the southwest, where the landslide occurred, said Xue, the provincial official who works in the flood prevention headquarters.

"The landslide was triggered by heavy rains in the past few days, especially last night's rain. There is little chance that the people who are trapped will be able to survive," Xue said in a phone interview from Guiyang, the provincial capital, about 120 miles northeast of the landslide-hit area.

"I heard a huge 'bang' this afternoon when it was raining before I realized it was a landslide," resident Huang told AP. "Some people did not manage to run away and I assume that they are all dead."

Rescuers brought search equipment and dogs but no signs of life had been detected, Xu Zhong, a member of the local fire brigade, told CCTV by phone. "Nearly half of the hill fell and buried two village communities situated at its foot," he said.

The threat of more landslides amid forecasts of heavy rain on Monday night forced rescuers to take shelter in a safe area in the evening until the search could be resumed, Xu said.

State broadcaster CCTV said Vice Premier Hui Liangyu was heading to the area with a team of experts to help coordinate rescue work.

In Malong county of Yunnan province, floodwaters had receded enough that some people returned to inspect their homes over the weekend, CCTV said. Residents returned to find their mud-brick houses covered in sludge in areas that had been under 6½ feet of water after a reservoir overflowed.