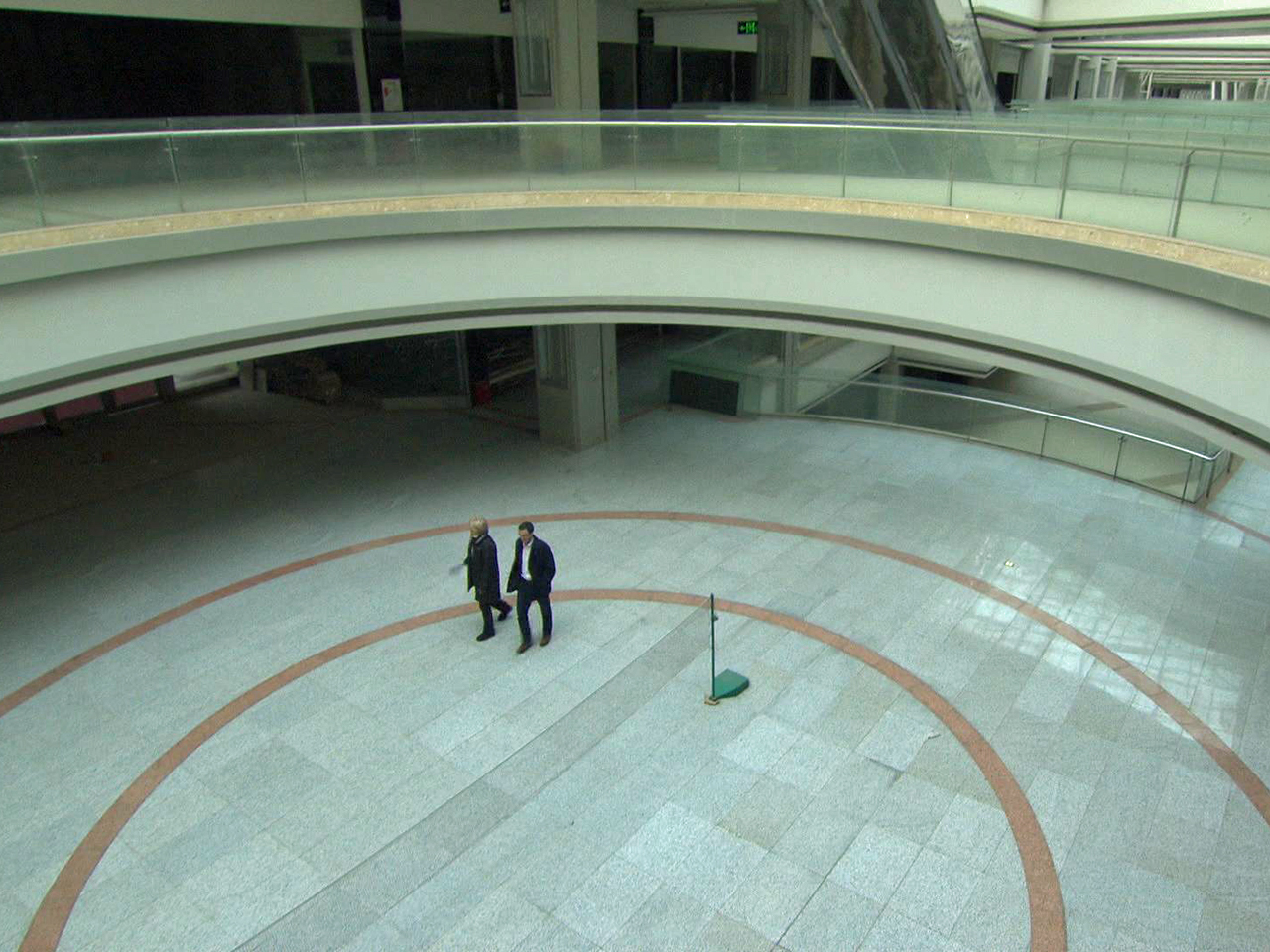 The following script is from "China's Real Estate Bubble" which originally aired on March 3, 2013, and was rebroadcast on August 3, 2014. Lesley Stahl is the correspondent. Shachar Bar-On, producer.

For three decades, China had been nothing short of a financial miracle: a state-controlled economy that managed to navigate its way out of the tatters of communism to become the world's second largest -- deftly managed by government policies and decrees. But now, many in the financial world are looking nervously at China.

That's because one sector Chinese authorities concentrated on was real estate and construction. And as we first reported in March last year, that may have created the largest housing bubble in human history. If you go to China, it's easy to see why there's all the talk of a bubble. We discovered that the most populated nation on Earth is building houses, districts and cities with no one in them.

Lesley Stahl: So this is Zhengzhou. And we are on the major highway, or the major road. And it's rush hour.

Lesley Stahl: And it's almost empty.

Gillem Tulloch is a Hong Kong based financial analyst who was one of the first to draw attention to the housing bubble in China. He's showing us around the new eastern district of Zhengzhou, in one of the most populated provinces in China - not that you'd know it. We found what they call a "ghost city" of new towers with no residents, desolate condos and vacant subdivisions uninhabited for miles, and miles, and miles, and miles of empty apartments.

Lesley Stahl: Why are they empty? I've heard that they have actually been sold.

Lesley Stahl: They've all been sold? They're owned.

Owned by people in China's emerging middle class, who now have enough money to invest but few ways to do it. They're not allowed to invest abroad, banks offer paltry returns, and the stock market is a rollercoaster. But 16 years ago, the government changed its policy and allowed people to buy their own homes and the flood gates opened.

Gillem Tulloch: So what they do is they invest in property because property prices have always gone up by more than inflation.

Lesley Stahl: And they believe it will always go up?

Gillem Tulloch: Yeah, just like they believed in the U.S.

Actually, property values have doubled and tripled and more -- so people in the middle class have sunk every last penny into buying five, even 10 apartments, fueling a building bonanza unprecedented in human history. No nation has ever built so much so fast.

Lesley Stahl: How important is real estate to the Chinese economy? Is it central?

Gillem Tulloch: Yes. It's the main driver of growth and has been for the last few years. Some estimates have it as high as 20 or 30 percent of the whole economy.

Lesley Stahl: But they're not just building housing. They're building cities.

Lesley Stahl: Giant cities being built with people not coming to live here.

Gillem Tulloch: Yes. I think they're building somewhere between 12 and 24 new cities every single year.

Unlike our market driven economy, in China it's the government that has spent some $2 trillion to get these cities built - as a way of keeping the economy growing. The assumption is "if you build it, they'll come." But no one's coming.

Lesley Stahl: Wow. This is really completely, totally empty and it goes up -

Gillem took us to this shopping mall that's been standing vacant for three years.

Lesley Stahl: Can I find this all over China?

Gillem Tulloch: Yes, you can. They've simply built too much infrastructure too quickly.

Lesley Stahl: But I see KFC behind you. I see Starbucks over there. I see some other very recognizable American franchises coming in here. At least they-- does that mean they have faith that this is going to ignite?

Gillem Tulloch: No, these are all fake signs. Just to get potential buyers the impression of what it might look like if they moved in.

Lesley Stahl: They're not real? So I see KFC didn't-

Gillem Tulloch: No, they haven't.

It's all make-believe -- non-existent supply for non existent demand.

Lesley Stahl: Look at that. Swarovski. Piaget. They're hoping for high end too.

Lesley Stahl: And it's all Potemkin.

It's surreal and it's everywhere. Like the city of Ordos in Mongolia built for a million people who didn't show up. And no, you are not in England. You're in Thames town -- a development near Shanghai built like an English village.

Gillem Tulloch: And it was finished, I think, around five or six years. And it must have cost close to a billion U.S. dollars. And you'll see, it's still standing there empty.

Lesley Stahl: Well, I heard that there is some industry there or some business, one business there.

And what's more uplifting than a wedding -- or 10? You can see these empty developments on the edge of almost every city in China.

Lesley Stahl: What about the idea that China is urbanizing? People are flooding into cities by the hundreds of millions. And that this really is a smart move: build the housing to accommodate the urbanization process.

Gillem Tulloch: Well, so people are being moved into the cities. But that doesn't necessarily mean that they can afford these apartments which, you know, cost $100,000 U.S. or whatever. I mean, these are poor people moving into the cities, so they're building the wrong sort of apartments.

And what's worse, to build all these massive cities, they've had to tear down what was there before, clearing rice fields and displacing by some counts tens of millions of villagers. On the edge of Zhengzhou, Gillem and I came upon a strange sight.

Lesley Stahl: I'm just watching what they're doing, these-- do you have any idea?

Gillem Tulloch: I think they're trying to recycle the bricks.

These villagers were salvaging what's left of their homes, bulldozed to make room for more empty condos, already encroaching in the distance.

Lesley Stahl: There are all these empty apartments over here. Can they conceivably move into those up-scale places?

Lesley Stahl: What will happen to them, do you think?

Gillem Tulloch: I mean, they'll be forced to relocate somewhere. I have no idea where they'll go.

These are the immediate casualties of the building boom. And there's another problem: analysts warn that all this building has created a bubble that could burst.

Lesley Stahl: So if the bubble bursts, who's left holding the bag?

Gillem Tulloch: There are multiple classes of people that are going to get wiped out by this. People who have invested three generations worth of savings -- so grandparents, parents and children - into properties will see their savings evaporate. And then, of course, 50 million construction workers who are working on all these projects around China.

The prognosis of a bubble about to burst isn't only coming from financial gloom-and-doomers. We heard it from the most unlikely source.

Lesley Stahl: Are you the biggest home builder in the world?

Lesley Stahl: You may be?

Wang Shi: Yes. Only the quantity, not quality.

Wang Shi is modest, but his company, Vanke, is a multibillion dollar real estate empire, building more homes than anyone in China. He was born on the frontlines of communism, and joined the Red Army. But he secretly read forbidden books about capitalism, so that when China liberalized its economy, he rushed to the frontlines of the free market. Even he thinks today's situation is out of control.

Lesley Stahl: Are homes in China too expensive today?

Lesley Stahl: Here's a number I saw. A typical apartment in Shanghai costs about 45 times the average resident's annual salary.

Wang Shi: Even higher, even higher.

Lesley Stahl: What does that mean for your economy if it's just too expensive for the vast majority of people to buy?

Wang Shi: I think that dangerous.

Wang Shi: That's the bubble. So I think that's the problem.

Lesley Stahl: Is there a bubble?

Lesley Stahl: There is a bubble and the issue is will it burst or not? That's the big issue--

Wang Shi: Yes, if that bubble - that's a disaster.

Lesley Stahl: If it burst?

Wang Shi: If it burst, that's a disaster.

To try and prevent the disaster the Chinese government decided to act. Heard of their one child policy? Since 2011, China has had what amounts to a one apartment policy, where it's very hard to buy more than one apartment in major cities. Because of this, prices plunged. The bubble was being tamed. And yet, the taming was creating all kinds of unintended consequences.

Lesley Stahl: Are many developers in debt?

Lesley Stahl: And are many stopping development in the middle of projects 'cause they don't have the money to go forward?

A problem because the slowing down of construction led to a downturn in the overall economy. Unfinished projects dot China, and not just apartment buildings.

Lesley Stahl: Look at this. Can you believe it?

Analyst Anne Stevenson-Yang who has traveled across China showed us a giant project all but abandoned in the port city of Tianjin with concrete skeletons as far as the eye can see. The plan is to build a new financial district to rival Manhattan including a Lincoln Center and a World Trade Center, only taller. But it all seems frozen.

[Anne Stevenson-Yang: There's supposed to be a Rockefeller Center here.

Anne Stevenson-Yang: I hope they have a Christmas tree too. Skating rink.]

City officials told us everything stopped because developers want to build all the facades at once to match. But on the ground we heard a different explanation.

Lesley Stahl: Workers told us that many of these buildings haven't had any work done on them for weeks, months, as if the developers just don't have the money to go on.

Anne Stevenson-Yang: It's true. You see that happen first. The migrant workers will go home. That's often the first sign that the debt crisis is starting.

Anne Stevenson-Yang: Well, when you stop paying your bills, then everything stops.

It could become a debt crisis because of the huge loans most of the developers took out. If they can't repay them, the whole economy'll seize up.

The government's great fear is that all this could lead to social unrest and that's not hypothetical.

When regulations caused property prices to drop, it infuriated all those homeowners who watched the value of their nest eggs plummet.

Lesley Stahl: And there's already been some demonstrations over real estate around the country.

Lesley Stahl: Have you had demonstrations against your showrooms anywhere? You're company?

So often, Wang Shi shudders to think what would happen if the bubble actually burst.

Wang Shi: If that bubble break, that maybe who know what will happened? Maybe that-- maybe--maybe the next Arabic Spring--

Lesley Stahl: A lot of economists say that it's too big for even this government to control.

Wang Shi: A ha. I believe that top leaders have enough smart to deal with that. I hope!

Lesley Stahl: You're doing this.

Meanwhile, people who can afford it are still buying as much real estate as they can. They're even finding ways around the one apartment restriction in big cities. Can't buy in Beijing? Just cross the city line and the boom is in full swing. Flyers advertising new projects, potential buyers crowding buses to see new construction and new owners line up to register their new apts. Like us in our bubble, they just don't believe the good times will ever end.