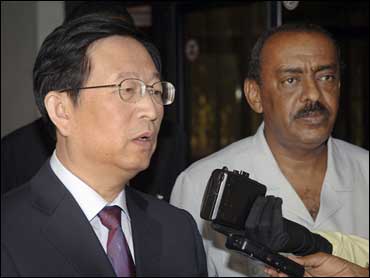 Five Chinese oil workers kidnapped in Sudan were killed by their captors during a botched rescue attempt, the Foreign Ministry said Tuesday.

Ministry spokeswoman Jiang Yu said the workers were killed during a rescue effort by Sudan that freed two other workers. She said China was working to free another two workers still being held.

The nine were kidnapped by rebels nearly two weeks ago.

Jiang said China was involved in the rescue attempt, but declined to say if the Chinese government had been in contact with the rebels and refused to give further details. She said China had a working group in Sudan at the time of the rescue.

"The Chinese and Sudanese governments have made great efforts for their rescue," Jiang said at a regular news conference.

"We express strong indignation and condemnation to the inhumane terrorist deed of the kidnappers in killing these unarmed Chinese workers," Jiang said.

The Sudanese Foreign Ministry said Monday that the workers had been killed but it gave no details.

Rebels have previously warned Chinese and other oil firms to leave the country, saying their operations help support the government in Khartoum.

Beijing has been criticized by international rights groups for not using its financial ties to pressure the government to end violence in the Darfur region, where up to 300,000 people have been killed and 2.5 million driven from their homes.

China says it is doing all it can to advance the peace process, and last year appointed a special representative and veteran diplomat, Liu Guijin, to oversee the Darfur issue. He arrived in Khartoum on Friday for his fifth visit, the official Xinhua News Agency said.

Sudan's government has blamed rebels from Darfur for kidnapping the Chinese, but on Monday a spokesman for the rebels denied involvement. The Chinese were snatched on Oct. 18 while traveling near an oil field in the southwestern region of Kordofan.

It was the third attack on Chinese targets in the last 12 months.

The China National Petroleum Corp. said on its Web site that the workers belonged to one of its subsidiaries, the China Petroleum Engineering and Construction Corp.