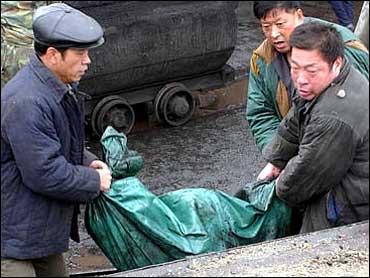 The managers of an illegal coal mine in China hid the bodies of 17 dead miners after a gas explosion earlier this month and underreported the accident death toll, the official Xinhua News Agency said Thursday.

Officials at the Jiajiapu Coal Mine in central Shanxi province reported 19 miners had died in the accident on July 2, but a total of 36 were actually killed, Xinhua said.

An investigation revealed that mine officials shipped bodies to another town to cover up the death toll, it said. The unreported bodies were found in a hospital and a crematorium in Ulanqab, a city in China's northern Inner Mongolia Autonomous Region, Xinhua said.

Ulanqab is about 90 miles north of Ningwu County, where the blast occurred.

Mine operators are obliged by Chinese law to pay compensation to the families of miners killed on the job.

The mine was operating without official permits, Xinhua said.

Police have detained Wang Jianwu, the mine's legal officer, and Hou Yuefang, a mine contractor, Xinhua said. No charges or date of detention were given. The investigation was still underway, it said.

"Those responsible for the accident will receive due punishment," Gong Anku, director of the Shanxi Provincial Coal Mine Safety Supervision Administration, was quoted as saying.

China's coal mines are the world's deadliest, with explosions, floods and fires killing thousands of workers each year. Accidents often are blamed on lack of safety equipment and lax safety rules.

Last year, 6,027 Chinese mine workers were killed — an average of about 16 deaths a day.