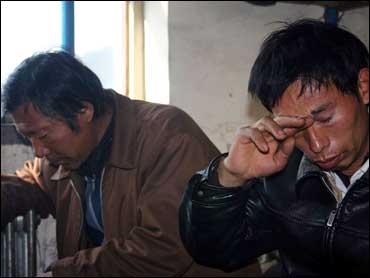 The death toll in a massive gas explosion at a coal mine in northern China rose to 105 Friday, the government's Xinhua News Agency said, making it the nation's second deadliest mining disaster this year.

Rescuers from among 15 crews sent to the mine in Shanxi province's Hongtong county were pumping out deadly carbon monoxide from a shaft in hopes of finding survivors or recovering additional bodies, the central government's State Administration of Workplace Safety said on its Web site.

The exact number of miners underground at the time of Wednesday's accident was still unclear. Citing mine officials, Xinhua on Friday raised the figure to about 120 from the previously reported 111.

State broadcaster CCTV said the mine owner and its manager had been detained by police for questioning. The mine's bank accounts had been frozen.

In a sign of government frustration at the continuing high death toll in China's mines, safety administration chief Li Yizhong flew to the mine late on Thursday to inspect aboveground facilities and help lead rescue efforts, the administration Web site said.

Li, who has pushed to reduce China's high numbers of industrial deaths through shaming officials and demanding accountability, authorized additional resources for the rescue and "strengthened rescue command," it said.

The administration said the mine's No. 2 shaft had been cleared by some of the 15 rescue teams sent from the nearby coal industry center of Linfen. However, heavy carbon monoxide concentrations were hampering rescue efforts in the No. 9 shaft where other miners were believed to have been working, forcing workers to ventilate it mechanically before entering.

Work safety officials reached by telephone in Linfen and at provincial government headquarters said they had no updated information.

The mine, owned and run by the county government, was reportedly licensed to produce 210,000 tons of coal per year.

Many of the accidents are blamed on mine owners who disregard safety rules and fail to invest in required ventilation, fire control and other equipment.

Despite repeated safety crackdowns, the sizzling economy's voracious appetite for coal to generate electricity provides ample motivation for many operators to cut corners in pursuit of production bonuses.