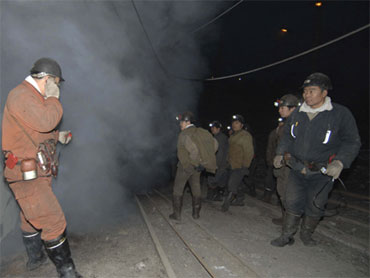 Updated at 10:53 p.m. EST
Rescuers worked in frigid cold to reach 21 miners trapped underground Sunday as the death toll from a huge gas explosion in a northern Chinese mine jumped to 87 — the deadliest blast to hit the beleaguered industry in nearly two years.

The pre-dawn blast Saturday at the state-run Xinxing mine in Heilongjiang province near the border with Russia was the latest to hit China's mining industry — the world's deadliest. Authorities say safety was improving, but hundreds still die in major accidents each year.

The death toll more than doubled overnight, reported the official Xinhua News Agency. A duty officer at Xinxing's work safety authority and an employee at the company that owns the mine confirmed 87 had died.

Ventilation and power were restored in the mine, said the employee, who refused to give his name because he was not authorized to speak to the media. The mine's director, deputy director and chief engineer were fired Saturday, he said.

A total of 528 people were working in the Xinxing mine at the time of the 2:30 a.m. explosion Saturday, the State Administration of Work Safety said in a statement. Xinhua reported 420 escaped.

Television footage showed smoke billowing out of the mine after the blast that resulted from a gas build-up. The explosion caused a nearby building to collapse.

State-run CCTV displayed a diagram showing the miners trapped about a third of a mile (half a kilometer) underground. Footage showed one entrance was blocked, and rescuers in orange suits with breathing equipment attempted to enter through another.

Overnight temperatures dropped as low as 14 degrees Fahrenheit, according to the Central Meteorological Station.

Wang Xingang, one of those rescued, recounted how the blast briefly knocked him out.

"When I regained consciousness, I groped my way out in the dark and called for help," Xinhua quoted the 27-year-old electrician as saying.

Xinxing is located near the border with Russia. Large state-owned coal mines, such as Xinxing, are generally considered safer than smaller, private ones that account for the bulk of production. Saturday's blast underscores the difficulties the government faces in trying to boost safety while maintaining output.

Coal is vital to the vast population and booming economy, as China uses it to generate about three-quarters of its electricity.

The government has cracked down on unregulated mining operations, which account for almost 80 percent of the country's 16,000 mines. It says the closure of about 1,000 dangerous small mines last year has helped it cut fatalities.

Yet major accidents persist. In the first nine months of this year, China's coal mines had 11 such incidents with 303 deaths. Gas explosions were the leading cause, the government said.

A blast at the Tunlan coal mine in northern China's Shanxi province in February killed 77 people. In December 2007, a gas explosion at another Shanxi coal mine killed 105 people.
By Associated Press Writer Cara Anna