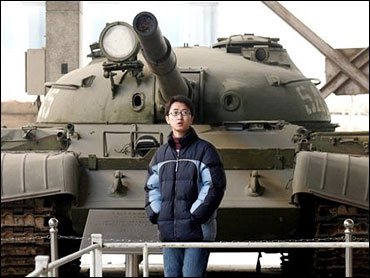 China is building up its military for the long-term goal of projecting its power well beyond Taiwan, the self-governing island that draws most of the mainland's attention today, a Pentagon report says.

The Chinese military is buying new weapon systems, including important purchases from Russia, while developing a new doctrine for modern warfare and improving training standards, the report released Tuesday says.

Still, the Pentagon rates China's current ability to project power beyond its periphery as "limited." And, it says, China cannot yet be certain that its military, while steadily strengthening, is capable of conquering Taiwan.

"Current trends in China's military modernization could provide China with a force capable of prosecuting a range of military operations in Asia, well beyond Taiwan, potentially posing a credible threat to modern militaries operating in the region," the report stated. "Some of China's military planners are surveying the strategic landscape beyond Taiwan."

Among recent developments that point to greater Chinese interest beyond the Taiwan Straits:

Improvements in Chinese intercontinental-range missiles "capable of striking targets across the globe, including the United States."

Some air and naval force improvements, both planned and realized, are geared for future operations beyond the geography around Taiwan. These include airborne early warning and aerial refueling programs for the Chinese air force that will enable its fighter aircraft to operate in the South China Sea, for example.

All of China's short-range ballistic missiles, while deployed opposite Taiwan now, are mobile and can operate throughout the country to "take up firing positions in support of a variety of regional contingencies."

The short-term focus of China's military is preparing for potential conflict in the Taiwan Strait, said the report, an annual survey mandated by Congress.

China claims Taiwan as part of its territory and has threatened to invade if the self-governing island declares formal independence or resists Beijing's insistence on negotiating a reunification. The United States, which is Taiwan's main arms supplier, has cautioned both countries not to force a change in the status quo.

Kurt Campbell, who was a senior Asia specialist at the Pentagon during the Clinton administration, said in an interview that the report is "slightly more alarmist" than previous Pentagon assessments of China's military. He noted that the report focuses on a number of new Chinese capabilities, including a naval buildup.

The assessment said there are reasons to believe that China would not take military action against Taiwan.

"It does not yet possess the military capability to accomplish with confidence its political objectives on the island, particularly when confronted with outside intervention," it said. Chinese leaders also believe that attacking Taiwan would severely retard China's economic development and lead to instability on the mainland.

Defense Secretary Donald H. Rumsfeld said Tuesday prior to the release of the report that it illustrates why a European arms embargo against the Chinese should be kept in place.

Some members of the European Union, including France, have sought an end to the embargo, which was imposed after the Chinese military crushed student protests in Tiananmen Square in 1989.

It "clearly points up the reason that the president and the United States government have been urging the EU to not lift the arms embargo on the People's Republic of China," Rumsfeld told reporters at the Pentagon.

The House, while debating a State Department bill on Tuesday, accepted without dissent an amendment approving sanctions to deter foreign companies and nations, particularly in Europe, from selling arms to China.

The House defeated a similar bill last week, but changes were made to reassure American defense contractors that they would not be subject to penalties unless they knowingly transfer technologies that could potentially have military applications.