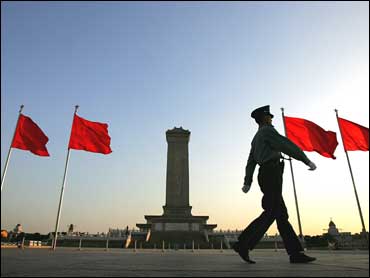 China might bar live television broadcasts from Tiananmen Square during the Beijing Olympics, apparently unnerved by the recent outburst of unrest among Tibetans and fearful of protests in the heart of the Chinese capital.

A ban on live broadcasts would disrupt the plans of NBC and other major international networks, who have paid hundreds of millions of dollars to broadcast the Aug. 8-24 games and are counting on eye-pleasing live shots from the iconic square.

The rethinking of Beijing's earlier promise to broadcasters comes as the government has poured troops into Tibetan areas wracked by anti-government protests this month and stepped up security in cities, airports and entertainment venues far from the unrest.

In another sign of the government's unease, 400 American Boy Scouts who had been promised they could go onto the field following a March 15 exhibition game between the Los Angeles Dodgers and San Diego Padres were prevented from doing so by police.

"It was never specifically mentioned to me it was because of Tibet that there were extra controls, but there were all these changes at the last minute," said a person involved in the Major League Baseball event who asked for anonymity because he was not authorized to speak to the media.

The communist government's resorting to heavy-handed measures runs the risk of undermining Beijing's pledge to the International Olympic Committee that the games would promote greater openness in what a generation ago was still an isolated China. If still in place by the games, the security measures could alienate the half-million foreigners expected at the games.

Like the Olympics, live broadcasts from Tiananmen Square were meant to showcase a friendly, confident China - one that had put behind it the deadly 1989 military assault on democracy demonstrators in the vast plaza that remains a defining image for many foreigners.

"Tiananmen is the face of China, the face of Beijing so many broadcasters would like to do live or recorded coverage of the square," said Yosuke Fujiwara, the head of broadcast relations for the Beijing Olympic Broadcasting Co., or BOB, a joint-venture between Beijing Olympic organizers and an IOC subsidiary. BOB coordinates and provides technical services for the television networks with rights to broadcast the Olympics, such as NBC.

Earlier this week, however, officials with the Beijing Olympics Organizing Committee, or BOCOG, told executives at BOB that the live shots were canceled, according to three people familiar with the matter who requested anonymity because they were not authorized to speak to the media.

"We learned that standup positions would be canceled," one of these people said. "No explanation was given for the change."

Sun Weijia, the BOCOG official in charge of dealing with BOB, declined comment, referring the matter to press officers, three of whom also declined to comment. IOC offices were closed Friday for the Easter holiday; two spokeswomen did not immediately return e-mails and phone calls seeking comment.

The decision by BOCOG may not be final. The change was relayed verbally, one person said. All three hoped that IOC President Jacques Rogge and other leading Olympic committee officials, expected in Beijing next month for regularly scheduled meetings, may be able to prevail on Beijing committee to change its mind.

It's unclear whether the ban would apply to coverage of the Olympic marathon, which starts in Tiananmen. An early indicator will be a marathon test-event scheduled for April.

If the decision stands, it would be a blow to the TV networks whose money to buy the right to broadcast the games accounts for more than half the IOC's revenues. The biggest spender is NBC. It paid $2.3 billion for the rights for three Olympics from 2004 to 2008 - Athens, Turin and Beijing.

The Tibet unrest - which broke out March 10 in the regional capital of Lhasa and has since spread across western China - and the government's harsh response underscores the communist leaders' unease as the Olympics approach.

With paramilitary police patrolling Beijing at night and journalists being expelled from Tibetan areas, security measures are on par with those not seen since the government mobilized police to crush the Falun Gong spiritual movement in 1999-2000.

Activist groups have said for months that they planned to use the Olympics to promote their causes. But the challenge faced by China's leadership seems to grow more imminent.

Aside from Tibet protests, the government said it foiled a plot this month by Muslim separatists in western China to blow up a China Southern Boeing 757. Foreign activists angry about China's support for Sudan, which is party to a civil war in Darfur, said this week they would demonstrate in Beijing during the games.

After the Icelandic singer Bjork shouted "Tibet!" at the finale of a Shanghai concert this month, officials ordered tighter scrutiny of all performances.

The Boy Scouts seemed to get caught in a response to both the sometimes violent Tibet protests and Bjork; police canceled all on-field entertainment for the exhibition baseball games, including the singing of the Chinese and U.S. national anthems.

Beijing Olympic committee officials began signaling their discomfort with live broadcasts in Tiananmen Square to the IOC a year ago but discussions went back and forth, according to the people involved. The square - overlooked by a large portrait of communist founder Mao Zedong - has been a magnet for protests for decades.