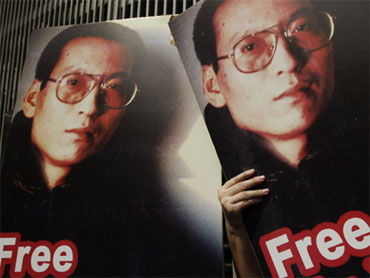 A bitter China denounced the awarding of the 2010 Nobel Peace Prize to Liu Xiaobo and said the decision would hurt relations with Norway.

The Foreign Ministry said in a statement Friday that the award should have gone to promoting international friendship and disarmament.

"Liu Xiaobo is a criminal who has been sentenced by Chinese judicial departments for violating Chinese law," it said. Awarding the peace prize to Liu "runs completely counter to the principle of the prize and is also a blasphemy to the peace prize."

It said the decision would damage bilateral relations between China and Norway. It did not give any details.

Liu was honored for "his long and non-violent struggle for fundamental human rights" by the Norwegian Nobel Committee. Chairman Thorbjoern Jagland said Liu was a symbol for the fight for human rights in China and the government should expect that its policies face scrutiny.

"China has become a big power in economic terms as well as political terms, and it is normal that big powers should be under criticism," Jagland said.

Unlike some in China's highly fractured and persecuted dissident community, the 54-year-old Liu has been an ardent advocate for peaceful, gradual political change, rather than a violent confrontation with the government.

In China, broadcasts of CNN, which is available in tourist hotels, upmarket foreign hotels and places where foreigners gather, went black during the Nobel announcement and when reports about the award later aired.

It was the first Nobel for the Chinese dissident community since it resurfaced after the country's communist leadership launched economic, but not political reforms three decades ago. The win could jolt a current debate among the leadership and the elite over whether China should begin democratic reforms and if so how quickly.

"China is in breach of several international agreements to which it is a signatory, as well as of its own provisions concerning political rights," it said, citing an article in China's constitution about freedom of speech and assembly.

"In practice, these freedoms have proved to be distinctly curtailed for China's citizens," the citation said.

The document Liu co-authored, Charter 08, called for greater freedoms and an end to the Communist Party's political dominance. It was an intentional echo of Charter 77, the famous call for human rights in then-Czechoslovakia that led to the 1989 Velvet Revolution that swept away communist rule.

"The democratization of Chinese politics can be put off no longer," Charter 08 says.

Thousands of Chinese signed Charter 08, and the Communist Party took the document as a direct challenge.

Police arrested Liu hours before Charter 08 was due to be released in December 2008. Given a brief trial last Christmas Day, Liu was convicted of subversion for writing Charter 08 and other political tracts and sentenced to 11 years in prison.

In a year with a record 237 nominations for the peace prize, Liu had been considered a favorite, with open support from winners Archbishop Desmond Tutu, the Tibetan spiritual leader the Dalai Lama and others.

When the Tibet-born Dalai Lama won the peace prize in 1989, both the Chinese government and some of the public were angry — the exiled Buddhist leader was endlessly vilified in official propaganda as a traitor for his calls for more autonomy for Tibet.

The son of a soldier, Liu joined China's first wave of university students in the mid-1970s after the chaotic decade of the Cultural Revolution.

Liu's writing first took a political turn in 1988, when he became a visiting scholar in Oslo — his first time outside China.

Liu cut short a visiting scholar stint at Columbia University months later to join the Tiananmen Square protests in Beijing in 1989. He and three other older activists famously persuaded students to peacefully leave the square hours before the deadly June 4 crackdown.

Liu went to prison after the crackdown and was released in early 1991 because he had repented and "performed major meritorious services," state media said at the time, without elaborating.

Still, five years later Liu was sent to a re-education camp for three years for co-writing an open letter that demanded the impeachment of then-President Jiang Zemin.