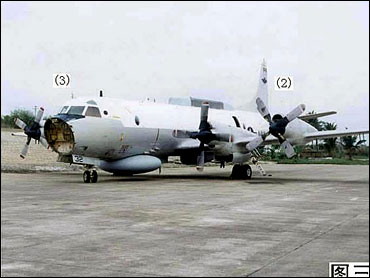 Shuddering and out of control, the Navy spy plane plunged toward the Earth. Inside, 24 stunned Americans worked feverishly - first to save themselves, then, when survival looked within reach, to prevent national security secrets from falling into Chinese hands.

They tossed classified materials out a hatch, smashed equipment with an ax and prepared to ditch their crippled aircraft.

The crew of the EP-3 electronic surveillance plane survived, but, unfortunately, so did some of its secrets.

A newly released Navy investigation report on the April 1, 2001, incident concludes that some of those classified materials likely were found by Chinese officials who took control of the plane when it landed on China's Hainan Island.

The crew was detained on the island for 11 days and China refused Bush administration requests to fly the damaged plane home; it was cut up and flown back to U.S. territory in pieces.

A partially censored copy of the report was provided to reporters Thursday after it was released to Jane's Defense Weekly in response to a Freedom of Information Act request. Deleted were specifics about the classified materials aboard the spy plane and procedures for handling the materials.

Investigators found no fault with the crew's performance, although they recommended that aircrews of such planes be required to practice emergency destruction drills as part of regular training.

The report made no assessment of the damage caused by the likely compromise of national secrets, which likely included information about U.S. electronic surveillance targets or techniques.

The EP-3 was flying southeast of Hainan Island, five hours into a routine mission over the South China Sea, when two Chinese F-8 fighter jets approached it. One of the fighters eventually struck the Navy plane in its No. 1 propeller, ripping the fighter in half and throwing the EP-3 out of control.

The U.S. plane fell into an uncontrolled dive from about 22,000 feet, descending at a rate of 4,000 feet per minute. The Chinese pilot was killed.

"The destruction of classified material was accomplished while the aircrew was probably still in shock from the aircraft collision and the subsequent rapid descent of the aircraft and with very little time prior to landing," the report said.

After reviewing the investigators' findings, Adm. William Fallon, the vice chief of naval operations, in March 2003 recommended no disciplinary action against the crew, saying they "performed well under dire circumstances." A copy of Fallon's letter was released with the investigative report.

The EP-3 crew belonged to Fleet Air Reconnaissance Squadron One, based at Naval Air Station Whidbey Island, Wash. The report said they were fully qualified and ready for the mission. The EP-3 is designed to conduct reconnaissance and collect electronic signals intelligence.

Materials classified as confidential, secret and top secret were, as a matter of normal practice, carried aboard the plane in papers, magnetic tapes, computer disks and computer hard drives, the report said.

After the Chinese fighter struck the Navy plane, causing the U.S. plane to shake violently and snap-roll to the left at about a 140-degree angle of bank, the aircraft commander, Lt. Shane Osborn, gave the order for the crew to prepare to bail out.

Out of control, the plane fell to about 15,000 feet when it began to level off but continued to vibrate violently.

At 10,000 feet, the crew regained partial control of the plane. Procedures do not require that destruction of classified material begin in that situation. After the No. 1 engine was shut down and the plane became more controllable, the crew was redirected to "prepare to ditch," meaning they would stay with the plane as it went down.

Although not required at that point, the crew began to destroy classified material, the report said. Some was jettisoned out a hatch, and equipment was smashed with an ax and other hard objects such as metal containers. Upon landing at a military air base on Hainan Island some remaining classified papers were shredded.

The Chinese military ordered the Americans off the plane and took control of it. The investigation report said the crew had hidden some classified materials on the plane and hand-shredded some papers.

Treasures from 1857 "Ship of Gold" shipwreck up for auction